Cat stuck in a tree? 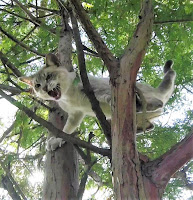 It happens all the time.  All cats are natural tree climbers, but when it is time to come down, some cats know how and some don’t.  Those that don’t know how to come down are truly stuck.

Don’t let your cat suffer any longer.  If you are in the Baton Rouge, Louisiana area, give me a call or e-mail.  I will rescue your cat, and it won’t cost you a penny.

Cost
I rescue cats for free because I love cats, I hate suffering, and I don’t want the cat to suffer just because someone can’t pay.  Besides, I am retired, so I have the time, and this does not take me away from a paying job.  This is one way in which I am uniquely suited to reduce suffering, and it gives me great joy to do so.

It is very important to me that people know that I will rescue their cat even if they can't afford it.  For this reason, I refuse any offer of payment even though I am very grateful for the gesture.  If you want to give something, I encourage you instead to make a donation to Cat Haven or any other animal welfare organization of your choice.


Not in My Area?
If you are not in the Baton Rouge area, then be sure to check this Directory of cat rescuers all over the world.  Chances are good that you will find someone there.  If no one is listed for your immediate area, do not be afraid to call the ones closest to you.  You may be surprised to learn how far some of the rescuers will go.  Otherwise, they still might be able to help you find someone in your area.  Failing that, call your local tree service companies.  Many do not want to be bothered with cat rescues, but they still might be able to direct you to someone.

Rescue Philosophy
There are many ways to rescue a cat, and my goal is to do so in the least stressful manner possible.  Every cat is different, and every tree is different.  All rescue options will not be suitable in every case, but I will escalate to the next stress level only when the lower ones have failed or been deemed unsuitable.  In the end, however, even a stressful rescue is much better than none at all. 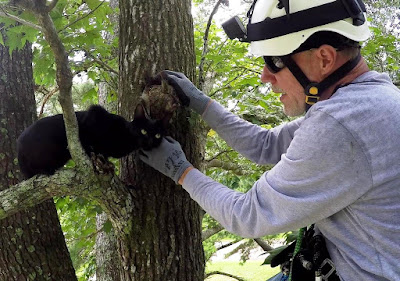 I like to enlist the cat’s cooperation as much as possible.  Not only is that easier on the cat, it makes my job easier as well.  I will use food to entice the cat to come closer to me or inside a carrier.  Most cats that have been stuck in a tree for a day or more are very food-motivated, and many will readily walk into a carrier to get it.  Some cats are so tired of being in the tree that they readily come to me begging for rescue without my enticing them with anything at all.  But not every cat is so cooperative.  Some will cooperate if I give them enough time to get used to me and see that I am not a threat.  However, some cats, especially feral ones, may not cooperate at all and instead climb higher in the tree.  Even so, I still have ways to rescue them.

I love cats, and I love trees too.  I climb trees using ropes and professional climbing methods that do no harm to the tree.  I never use spikes; I don’t even own them.

Why Do I Do This? 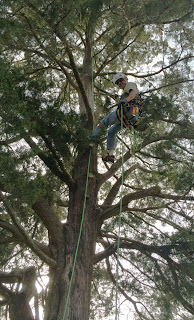 First, there is a need for it.  Cats continually get stuck in trees, and there are very few people who are willing and able to help.  In some areas, there is no one who will rescue the cat, and people and their cats suffer needlessly as a result.  I do it to help fill that void and reduce that suffering.  Also, remember that when I rescue a cat, I am also rescuing at least one person as well.  Sometimes, I rescue a whole family, including the children.  The people who love the cat are often suffering more than the cat is, and it feels very rewarding to me to return that cat to their arms and relieve their suffering.

Consider watching one of these slideshows of my favorite images from my rescues, and I think you will understand just how meaningful and important this is both to the people and their cats.


Rescue Stories
Below this section is the story of my most recent rescue.  For this and all the other individual rescue stories, see the Rescue Stories page.  For a general overview, consider these yearly compilations of the best moments from all my rescues.

Rescue Highlights of the Year

Posted by Cat Rescue Guy at 4:50 PM
Email ThisBlogThis!Share to TwitterShare to FacebookShare to Pinterest

It is easy to see how Cutie got her name. That is certainly what I would have called her whether I intended it to be her name or not. While Cutie has the looks, this six-month-old girl doesn't have the skill for climbing down a tree, so, when she climbed 60 feet high in a Sweet Gum tree just inside the woods behind her home, she was stuck there. Amy searched all over for help to get Cutie down, but she didn't find me until Cutie had been stuck in the tree for five nights.
When I climbed up to Cutie, she was a little cautious with me at first, but she quickly learned that I was probably a good guy, and she came carefully down her sloping limb toward me. Cutie could not get a firm grip with her claws when going down the sloping limb like this with no side shoots for a foot hold, so it took some courage on her part to do it. When she reached the trunk, she could not come to a secure stop, so her momentum forced her to step onto another limb on the opposite side of the trunk from me. That left her butt facing me, and, more importantly for her, she had no safe way to turn around from that point. That was not a problem for me, because I already knew that she was very comfortable with the sight of a carrier, so I simply reached the carrier around the trunk facing her while expecting her happily to walk inside. To my surprise, however, she reacted to the carrier with shock and turned around to go back out her limb. As she turned around, she lost the footing for her back legs and was hanging by her front legs. I held my hand beneath her to prevent a fall and to help her back up, and she continued her walk back up the limb to where she started. 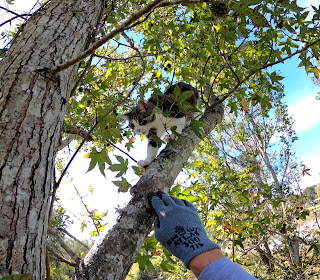 I quickly put the carrier away, prepared the cat bag, and worked to lure her back down the limb toward me again. After a few minutes, she got the courage to come back down, and, again, her momentum carried her quickly behind the trunk as before. As she tried to turn around, this time, she found herself hanging on the trunk vertically. She still somehow managed to get back on her original limb and walk back out to her original spot again. She was never in a position for me to grab her safely. 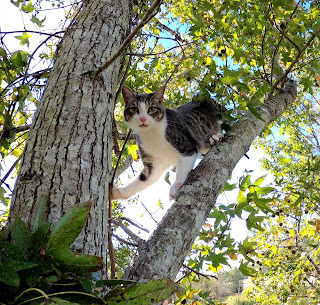 I did not expect her to come back toward me easily again after finding the last two excursions to be as scary as they were, so I pulled out a bag of treats and shook them. I knew this was a familiar and enticing sound for her, and she responded immediately. Again, she came down the limb toward me, and, again, she landed on the opposite side of the trunk before I could grab her. Just as before, in her attempt to turn around, she found herself hanging vertically on the trunk, and her cries made it clear she was frightened. I reached around, petted her to reassure her, and grabbed her by the scruff while using my other hand to pry her claws off the trunk. Each time I pried one paw loose, she grabbed another limb, but, otherwise, she never panicked or struggled. I moved vines out of the way and worked her free so I could pull the bag over and around her. I secured her in the bag and held her in my arms for a couple minutes to comfort and reassure her. She didn't cry and felt relaxed. 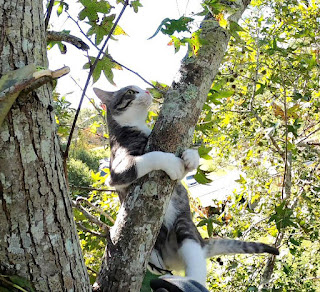 I took her back down and returned her to her grateful and loving family. They had all been so worried about her, so they were greatly relieved to have her safe and back home again. Later that evening, Amy sent a picture of Cutie sleeping on the recliner, and it is very rewarding for me to see Cutie getting some sound sleep on a soft, comfortable bed where she doesn't have to worry about falling. 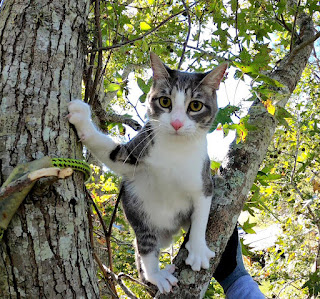 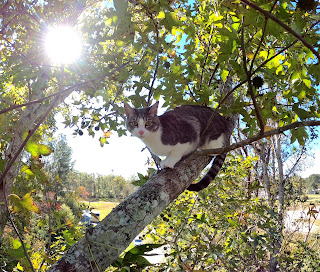 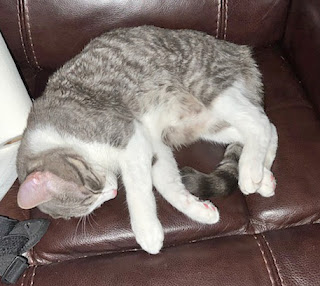