Cats don't care about holidays, and I have rescued cats in trees on every holiday there is, including Christmas day. This Christmas, I got a call for a cat that climbed or fell down just before I arrived there, but, at that moment, I got another call for a case where two cats were in the same tree. It was fortunate that the first cat came down on its own, because, otherwise, I would not have had time to rescue the other cats before sundown. By the time I arrived at the second case in Denham Springs, one of the cats came down on its own, but that still left little Darla, the sweet, six-month-old tabby girl, in need of rescue.
Darla had already spent one night in the tree and was not happy about it. The tree was skinny, covered with poison ivy vines and had a defect below Darla that weakened the stem. It would not be safe for me to go very high above that defect, so I needed to make sure Darla did not climb any higher. Fortunately, Darla was very cooperative and stayed there while I worked my way up to her. She walked into the carrier without hesitation, and I brought her down. 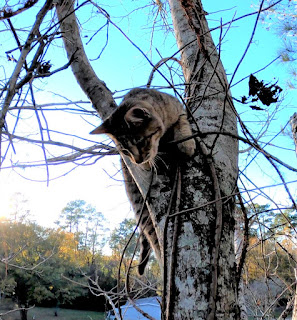 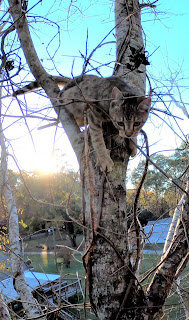 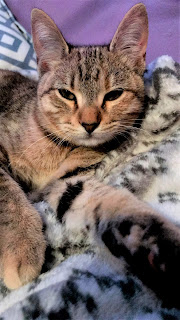 On the last day of the year, I had another rescue in Denham Springs, this time, for a one-year-old black girl cat named Midnight. Midnight had been in the tree for four nights and had settled in a large, comfortable nest, so there was little chance that she would simply fall out of the tree at some time. Her rescue was easy, because she stayed in her nest and made friends with me right away. She walked into the carrier with little trouble, and I brought her down to her family. 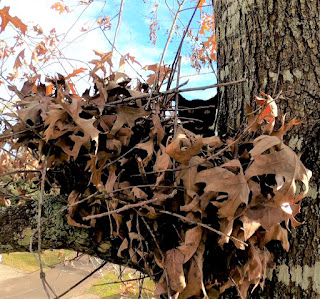 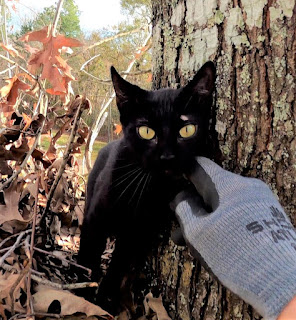 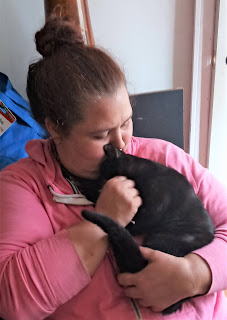