I wish I could show you just how sweet and cute Casey was when I rescued him from the top of a Sweetgum tree in his Slidell backyard, but my camera malfunctioned, and I got almost no video of him at all. Casey is a two-year-old, inside-only cat, but he slipped out the door and climbed 40 feet high in the tree where he generated great turmoil for Linda and Walter who were trying their best to get him down. By the time I arrived, Casey had spent two nights in the tree and was loudly vocalizing his displeasure.
Linda and Walter told me that Casey is a very friendly boy and likes to be picked up and held, but he does not like to sit on a lap. With that helpful information, I made a mental note not to expect him to step onto my lap. When I climbed up to him and we made our introductions, he was instantly trusting of me and anxious for my help. He came down to meet me by stepping down onto a tiny limb which was much too small for his weight and comfort. Even though I was not ready for him, I quickly picked him up off that limb before it broke and placed him in my lap while wondering how he would react to that. I had no other place to put him, but he didn't seem to mind. He relaxed and peered down over to one side while I hurriedly prepared the cat bag. This sweet boy remained calm and relaxed and knew this was his ticket down to the ground, so I had no trouble pulling the bag over him. 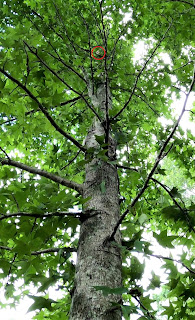 Casey is back home and safe now, and Linda and Walter are very relieved about that. Even though his first taste of freedom left a bad taste in his mouth, Casey seems to want more. He spends a lot of time on his perch by the window and is making frequent attempts to escape outside again, so we may be seeing him again in the future. I certainly won't mind, and I would be sure to get video of him next time. 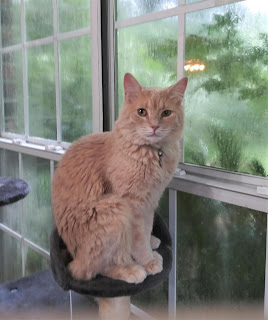