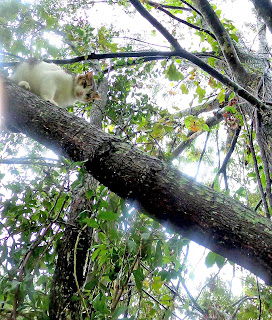 We had to wait several hours for all the stormy weather and lightning to stop before I could go rescue Meowki. Poor guy was stuck in a tree during that weather, and he was not happy about it. Meowki is a three and a half year old kitty who got stuck in the tree the night before, and he did not want to spend another night there. He was about 25 feet high in a tree very close to his Baton Rouge home where he lives with his owner, Delilah, but the tree was close to a power pole with wires reaching in several directions, and two of those wires ran directly beneath the limb where he was resting.
Meowki is not known for being super friendly to strangers, but I did my best to make friends with him as I approached. He was not impressed, however, and I could not convince him to let me get close. He turned away from me and walked out near the end of his limb and sat there defiantly. I offered food to him, but he was not taking the bait. 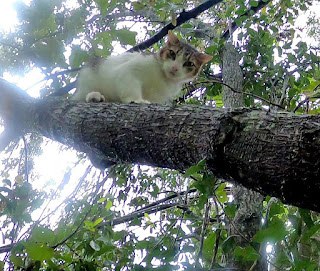 I could not lure him to me, and I did not want to use the long, metal rescue pole while two electrical wires ran closely beneath the limb, so I went back to the ground, retrieved my trap, and climbed back up to install the trap in the tree. Once the trap was in place, I went back to the ground hoping that he would go into it fairly quickly. I walked away where I was out of his sight and waited quietly. After several minutes with no progress, Delilah went out and stood on the opposite side of the tree and calmly coaxed him toward her and the trap. He responded to her and slowly walked toward the trap where he found the trail of bits of food leading him inside the trap. In just a few minutes, he was inside and the door closed. As the sun was setting, I climbed back up there, lowered him to the ground, and Delilah took him inside and released him.
I hope Meowki does not get stuck in a tree again, because I don't know if he will fall for the trap trick again. 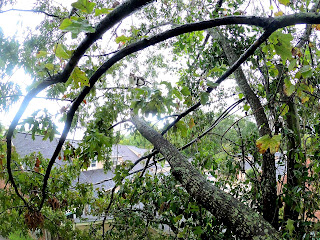