Spanky was a very difficult rescue.  The poor dear had been in the tree nine days by the time I got there, and those nine days had been very difficult ones.  There were very violent thunderstorms with intense lightning almost every day during that time, and to make it worse, she was in the tree during the 4th of July and all the fireworks that exploded all around her.  The cat's owner, Katherine, managed to find a cable TV worker in the neighborhood who was in a bucket truck, and she persuaded him to try to rescue her cat.  She also persuaded the local fire department to give it a try.  They all succeeded only in scaring the cat higher in the tree.  Also going on during this time, there were many large trucks and heavy machinery with very loud engines, brakes and horns working close by.  Poor Spanky had endured many scary things in this world.  And then I showed up.

Spanky was a tame, pet female cat, but she was afraid of strangers, so she was already predisposed to fear me.  But sometimes, when cats have been in a tree for a long time, they readily accept the help of a stranger when they normally would run.  At first, I thought Spanky was going to accept me as a friendly guy because she stayed in her place as I climbed closer to her and spoke to me occasionally in a calm voice.  But when I finally reached just below eye-level with her, she decided she could not risk it and climbed higher.  From this point onward, in her mind, I was the predator, and she was the prey.

When I first arrived, she was in the topmost branch union of the tree where I circled in red in the picture to the left.  When I got too close to her, she climbed the branch to the right and went as far to the top of the tree as she could go.  I pulled myself up to stand into that branch union where she had been, but I could not go any higher than that.

I had already tried to entice Spanky with some food, but she showed no interest in it.  She simply feared me too much to overcome even her extreme hunger.  Since she could not be coaxed to come to me, and since she was well out of my arm's reach, the only option I had was to use either the long-handle net or the rescue-pole.  I tried both, but the limbs and her position made it impossible to get the net into any kind of workable position where I could safely make her fall into it.  The rescue-pole was better but not by much.  I had to extend the pole to its maximum 12 foot length to reach her.  The limbs and stubs, and Spanky too, all conspired against me as I struggled over and over and over again trying to get the noose positioned just behind her front legs.  Poor Spanky was severely stressed and truly exhausted and not the least bit cooperative.  It was painful and heart-breaking for me to watch her suffer with my attempts to catch her.  A couple of times she almost fell; several times she was thinking about jumping.  At one point she just couldn't 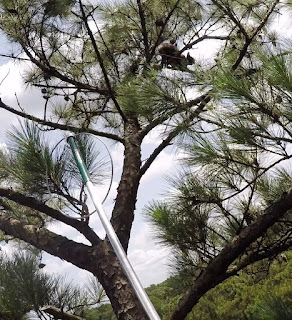 go any more and laid herself down on the limb with her back legs dangling, lowered her head and closed her eyes.  She didn't budge as I tried to loop the noose around her.  She did not have the energy to care anymore.  I could not get the noose under her while she was lying down, so I gave her some time to recover and then started to work on her again.  I finally got the noose around her body, but it was positioned close to her back legs instead of her front.  Again the limbs snagged the noose and made it difficult to position the noose correctly, but I finally managed to get it in place and I tightened it.  I finally had her.  I placed her in the net, released her from the noose, and began our descent.  When I reached the ground, Catherine took her inside the house where she released her and fed her.  Everyone was very relieved, but none more so than Spanky.

I had my helmet-mounted camera with me and turned on, but the rescue took so long that the battery died just before the actual rescue which is the only interesting part.  So once again, I have no video to show, or, that is, no video worth watching.  I feel so frustrated with my bad video luck and klutziness, but Spanky is now down, safe and happy, and that's the most important thing. 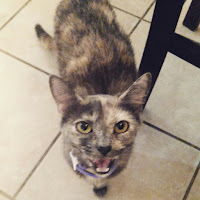 Katherine sent me this picture the day after the rescue and told me that Spanky is doing great.  That is music to my ears and soothes my worried heart.