It was a dark and stormy morning.  Actually, it wasn't stormy during the rescue, but it sure was immediately after.  Poor Harvey had already endured a thunderstorm the afternoon before, but on this day, the afternoon thunderstorm came in the morning instead.  While there were dark clouds all around when I arrived, there was no rain, and I could not hear any thunder in the far distance, so I prepared to climb.  Just as I start climbing, I began to hear thunder far, far away.

Lightning is a serious threat for any tree climber, but Louisiana ranks second in the nation for deaths by lightning.  Florida is first.  My policy is to abort any rescue whenever I can hear thunder, because the risk of the tree being struck by lightning is very real, and the consequences are often deadly.  But since I learned that Harvey is a friendly boy, even to strangers, I decided to proceed with the rescue with the expectation that it would be quick, and the risk was negligible at this far distance from the storm.  I should have time to complete this rescue before the risk became worrisome.

Harvey is a sweet two-year old orange and white cat with a reputation for being friendly to strangers.  He lived up to that reputation and calmly greeted me when I climbed up to him.  I was happy to see that, because now I knew this rescue would go quickly.  But I needed to climb a little higher, and as I did so, my rope pushed against his body, and I made a lot of noise and commotion as I hurriedly pushed through some small limbs.  I had spooked him, and he walked all the way out to the end of the branch. 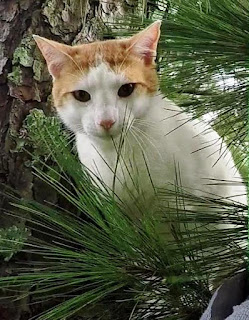 Now I had caused a delay, and I needed to give him some time to feel comfortable with me again.  I was not tied in to the tree up high enough to allow me to walk out the branch very far to get him, so as I listened to the increasing frequency of thunder in the far distance, I tried to offer him some food.  He showed no interest in the food, but while I had my head turned away, he walked closer to me and perched there with his back to me.  Now that he was closer, I could work to get close enough to him to scruff him into a bag.

When I reached out to him with my hand, he was receptive and allowed me to touch him.  He moved a little closer, but what was so amusing was that he walked backwards like a crawfish.  He apparently did not feel comfortable turning around on the branch, even though I had already seen him do it once before.  Harvey just liked going backwards better, and he was so cute as he did it. 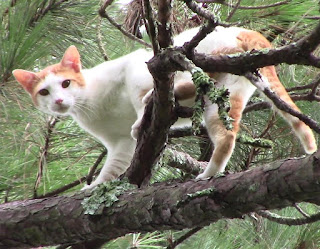 I reached out to him with the gloved bag on my hand, gave him some reassuring pats, and then scruffed him into the bag.  He handled it very well and gave me no trouble.  With the sound of the thunder getting closer, I quickly brought him down.  Once on the ground, a few raindrops began to fall.  I gave Harvey to the neighbor who took him to his home while I hurriedly packed up my gear.  After packing everything and saying my goodbyes, I left and the rain began to fall much harder just one mile down the road.  Then it started pouring and storming, flooding the streets and making it very difficult to see.  I felt so lucky to have finished before the storm hit, and I was so glad that Harvey was not still in the tree during all this chaotic weather.  Yep, the timing worked out well, and Harvey and I are both safe and doing fine.  And his mama is very happy to have him back in her arms again. 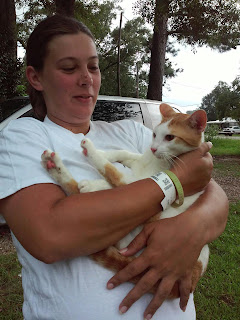 UPDATE -- 9/3/2016
It is with deep sadness that I must report that Harvey died two days ago as a result of an unknown trauma.  He was found dead in the yard, and his family guesses that he had been hit by a car, but the cause is not known for sure.

Many of the cats that I rescue stay on my mind for a very long time.  Harvey was one of those.  I really liked Harvey.  I loved how he walked along the branch calling to me for help when I first arrived.  I loved the way he watched me and stayed close and unafraid as I climbed up to him, at least until I made a commotion that scared him.  I loved how he scooted backwards on the branch to get closer to me.  I have never seen any cat do that before or since Harvey, and, because of that, I always refer to him as the crawfish kitty.  I loved his confident, sweet personality and his cute white and orange face.  Harvey was a fine representative of the cat family, and I am very sad to see him go.

I am going to watch his rescue video again, and I encourage everyone to watch it to see what a special cat he is.