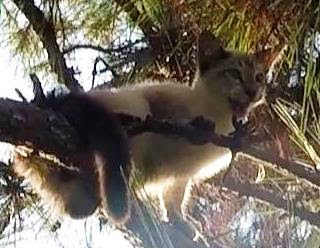 Kristy went out to the shed in her backyard to clean out some things that were damaged in the recent flood.  With her was her dog, Blue, who was on a leash.  As they went out into the yard, they noticed a young Siamese cat sitting in the yard.  Blue lives with cats and gets along well with them, but this was an unknown foreign cat, and he felt it was his duty to chase it away.  He bolted toward the cat so quickly and forcefully that he pulled the leash out of Kristy’s hand.  She ran after Blue who was running after the cat who was running for his life.  The cat ran under the back fence into a dense, overgrown wild area with Blue following closely behind.  Kristy was unable to get through the fence as quickly as they did and she listened as she heard them tangle somewhere in the weeds out of sight.  The cat ran up a pine tree on the edge of the property line to escape the danger, while Kristy managed to get Blue back to her and take him inside.

Kristy is a caring and responsible animal caretaker, and she has fostered both cats and dogs before.  Even though this was not her cat, she was not going to ignore it.  She gave the cat time to settle down and see that the yard was now safe, and she hoped that it would come down on its own.  When that failed, she called the fire department to see if they would help get it down.  To my surprise, they did go out there, but were willing to use only their 24-foot ladder.  The cat was out of reach at just over 30 feet high, so the fire department left with the cat still in the tree.  This is rare, and I appreciate their willingness to do that, even if they were unable to rescue the cat.  Kristy went to Facebook to ask for advice, and someone responded with a link to my page.  Kristy called me that afternoon, and I went out there right away. 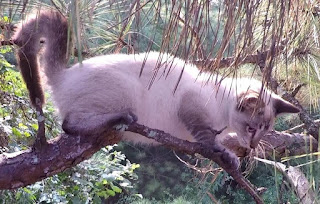 The cat was in the middle of three tall pine trees in a row along the fence line.  The back side of all the trees was an inaccessible wild area, but the front side was maintained.  However, there were a few sizable trees that blocked both my view and access to the pine trees.  It was very difficult to even see the cat.  The tree he was in leaned away over the inaccessible wild area, but he was out on a short limb and resting very near the trunk of the pine tree to the left.  If the cat was cooperative, it would be best to climb the tree to the left.  If he ran away from me, then he would likely climb the leaning tree in the middle, and I would have to transfer over to it.  Setting my ropes in the tree would be difficult.  I had to back away where I could see the top part of the tree over the other smaller trees.  I spotted three suitable branches that I could use that were 80 to 95 feet high.  It took me a few tries, but I finally shot my throw-weight and line over the lowest of those branches and installed my climbing rope while working it around the smaller trees. 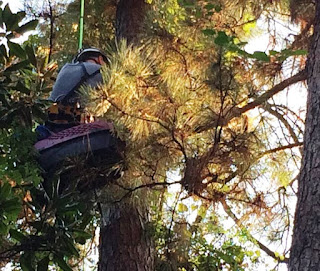 I climbed up to the cat calmly and sweet-talked to him along the way.  I did not want to do anything to frighten him.  I was very pleased to see that he stayed on his limb even though his voice suggested that he was a bit nervous.  His cries morphed into mild growls a few times, so I took my time and stopped frequently on the way up.  When I reached his level, I got my first good look at him.  Kristy had been worried that he may have been injured when he tangled with Blue, but I saw no signs of injury.  While he was still nervous, he did not move away from me, and I was starting to think he could very cooperative.  He just needed some time to calm down and learn that I am not a threat. 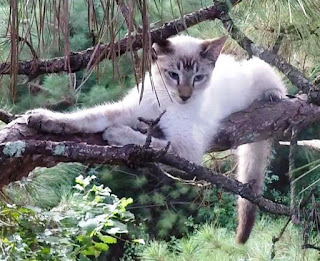 Usually when a cat is nervous, he is not interested in food.  Still, there are times when the food is all that is needed to break the ice, so, to me, it is always worth a try.  The try failed.  He sniffed it and even licked his lips at one point, but he did not bite.  Even though he did not eat, it still helped to make it clear that I was a friendly, non-threatening guy.  It also gave him more time to settle down.  After a few minutes, it was clear to me that he was calming down some.  He was still nervous, but getting better. He just needed some more time, so I gave him just that.  We talked a little bit, and I offered food to him another time or two, and as time passed, he was clearly getting more and more relaxed. 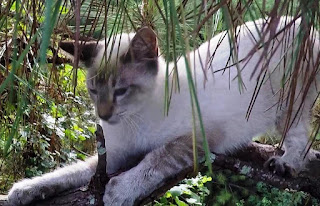 At that point, I felt it was safe to touch him.  I slowly moved my hand toward him and gave him a chance to sniff.  I touched him, and he was fine with it.  I pulled my hand back, and then did it again.  He was comfortable with it, so I began to pet his neck and back and rub his cheeks.  He enjoyed it, and I knew that I could now bag him.  I put on my gloved bag and again petted him a little before scruffing him into the bag.  He did not grasp at the branch and limbs and did not struggle or even complain much.  I easily pulled the bag over him, secured him and brought him down. 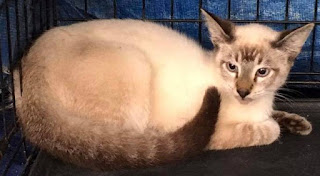 Kristy already had a large cage ready to put him in, so we put him in there and let him out of the bag.  He was understandably not happy to find himself inside a cage, but after a few minutes, he settled down and ate his bowl of food.  I scanned him in the unlikely event that he had a microchip, but I did not find one.  Kristy had already started networking with her friends and animal organizations to find a foster home for him, and I have no doubt that she will do what is best for this little boy.

When I checked with Kristy the next day, she told me that she was turning the cat over to a well-known local cat adoption organization which would care for him while he is neutered, vaccinated and adopted.  I was a little embarrassed and flattered when she told me that she decided to name the cat after me.  So now you know how he got his name.

While I had my camera on during the rescue, the video is not worthwhile.  The view was often blocked by the pine needles and limbs, and the action often took place outside the picture frame.  Kristy, however, made a special effort to video the rescue from the ground.  While her view of the actual rescue was probably even more obscured than mine, I’m sure she will post any video she finds worthwhile, and I will link to it here when she does.

Thank you, Kristy for caring and doing something about this little boy.