Paul is a sweet flame point boy who Marie adopted by default when her roommate moved out and left Paul behind.  Marie has lovingly adopted Paul as her own, but the cats outside didn't feel so inclined.  When Paul slipped outside one day, a rather unfriendly cat chased him up a tree.  Paul escaped the cat's wrath, but now he was stuck 30 feet high and did not know how to come down.  By the time Marie found me, Paul had been in the tree two nights.

Paul is normally a friendly boy, and he appeared relaxed when I arrived.  But seeing a stranger come up to you in a tree is not a normal situation, so I never know quite what to expect.  The commotion I created when setting my rope in the tree did not appear to stress him, and as I climbed up to him, he stayed in place and appeared calm.  When I reached level with him, however, he got concerned and started to climb farther out on his branch. 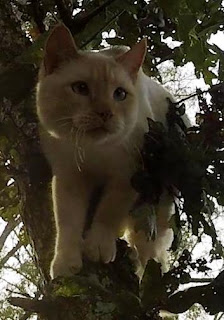 Paul went only a few feet out his branch and settled there.  He was not terrified, but he was not perfectly relaxed either.  He was just being cautious, so I thought that food might help break the ice.  I held the food out to him with my hand, and while he appeared interested, he did not reach out for it.  To make it less risky for him, I put the food on the end of a pole and held it closer to him but farther from me.  I could see his nose sniffing it and his tongue licking his lips, and I knew he wanted it.  I had to wait a few minutes before he felt comfortable enough to try it, but when he did, he was hooked.

I pulled the food down and held it in my hand lower down the branch.  He came down slightly for it, and I let him have another bite.  Then I pulled the food all the way down toward me, and he followed along.  He let me pet him while he ate some more.  He was trusting me and warming up to me very well now. 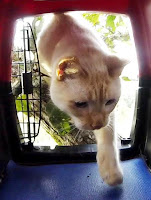 I put the food in the back of the carrier and held it up to him.  He sniffed the entrance thoroughly and considered going in for a few minutes, and in the end he decided it was safe to go in.  He walked inside and began eating the food again.  As I pulled the carrier down and closed the door, he was not distressed at all.  He was perfectly comfortable in the carrier and continued to eat his food even as I gave him a bumpy ride all the way down to the ground.

We took him inside and released him there.  He immediately went straight to his food bowl.  He alternated between drinking water and eating some more.  He was happy to be down, and Marie was very relieved.  She gave him some good loving as he settled into the sweet comforts of home. 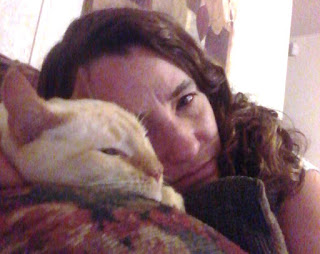