Muses is a sweet, one-year-old, white-and-black kitty in Baton Rouge who slipped out the door with her canine siblings and then got stuck in a tall Pine tree in the next-door neighbor's yard. Unfortunately, Muses picked a bad tree for a cat to climb, because there were no limbs suitable for a cat to perch within easy reach. She had to climb 60 feet high before she found a dead, broken stub where she could settle. She stayed there all night while Sherry and her family worried about her and tried to figure out what to do, but the next morning, Sherry found me.
Muses was frightened, so I climbed up to her slowly, pausing often to give her some sweet talk and sweet eyes and time to see that I was not threatening. At one point I saw her looking upward for an escape, but, thankfully, she did not climb higher. In time, she calmed down enough to let me approach her and make friends with her. When I began to pull the carrier closer, however, she appeared to get uncomfortable with it, so I quickly put it away. I did not want to risk her climbing any higher in the tree, especially with a bald eagle circling high overhead. Instead, I bagged her as gently and quickly as I could. She was not happy about that, but I consoled her as best I could. Hopefully, that was all soon forgotten, since a minute later, she was safely back down on the ground, and Sherry took her inside to release her. After getting settled back inside, Muses, as she often likes to do, went to sleep on top of her doggie brother. 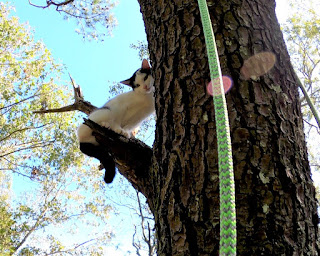 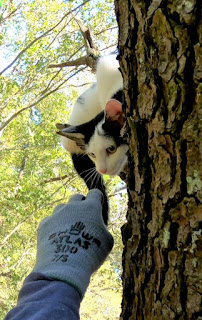 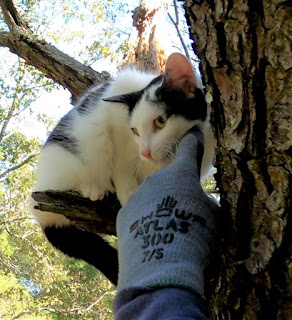 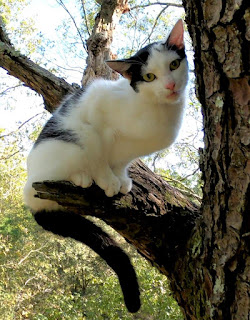 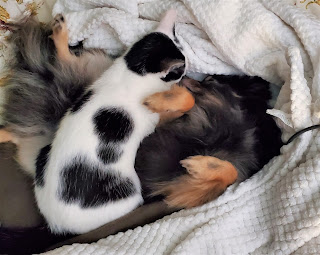