With this rescue, this sweet, one-year-old, orange tabby boy experienced a change in both name and owner. The man who originally owned him named him Nub because of his bob tail and decided to let his young, next-door neighbor, Sarah, have him after the rescue. Sarah loved the cat and was thrilled to have him, and she decided to name him Toby. So the cat went up the tree as Nub and came down as Toby. By whatever name, this cat is a sweetie, and he had been stuck 60 feet high in a Pine tree in Gulfport, Mississippi for three days and was desperate to get back down on the ground.
Once I climbed up to him, Toby happily greeted me and readily let me make friends with him. All I had to do was hold the carrier up to him, and he stepped inside. After I brought him down, Sarah took him, released him in his familiar territory and then fed him. After several minutes getting settled back into his original territory, Toby was taken next door to his new home with Sarah where he is enjoying a good life in a loving home. 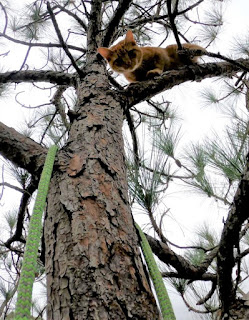 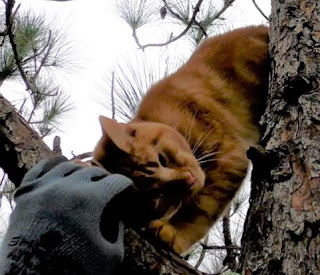 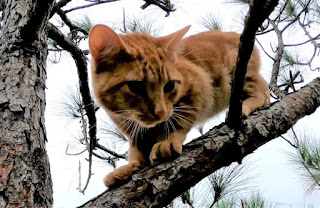