When her neighbor's cat had a litter of kittens, Jaime knew that she would have to be the responsible one and take care of them. She did the right thing and raised them, had them all spayed or neutered, and then found a home for each. All, that is, except this one gray tabby boy. She did not intend to keep him or even name him, but two years later, he is one of the family, and the family still refers to him simply as Baby Boy.
Baby Boy got stuck in a tree in the back yard during some cold weather, and Jaime was worried about him. After she failed in all her efforts to get him down or find someone who could, she finally found me, and I went out there to her home in Bush, Louisiana the next morning after Baby Boy's second cold night in the tree.
Baby Boy had a sad, pitiful cry as I prepared and climbed up to him, and when I began to get near him, he got scared. He had no place to go, since he was already near the top of the tree and the limbs were too short to go far, but after he got a sniff of my hand and felt the gentle pets on his head and back, he relaxed and made friends with me. I thought he would readily walk into the carrier, but he proved me wrong. He was not afraid of it; he just saw nothing there attractive. I opened a can of food and let him have a bite before putting the food in the back of the carrier. He eventually stepped halfway inside the carrier, but would go no farther. After a few more unsuccessful attempts to get him inside, I gave up and put him in the cat bag instead. 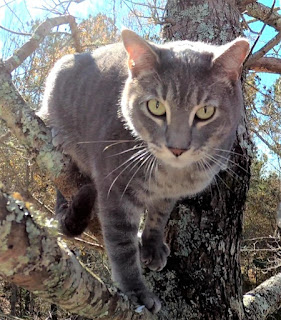 I brought him down to Jaime, and she took him inside to release him. He was clearly happy to be inside his warm home where he had his food and comfortable places to sleep. 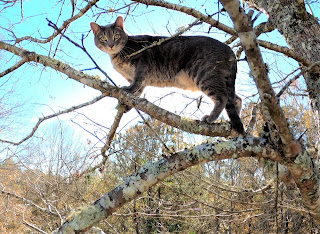 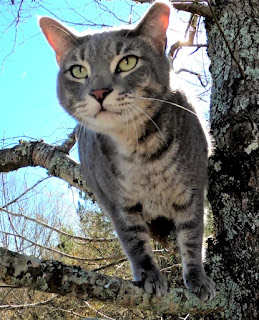 It was late in the afternoon when I got a message from Joanie in Folsom. Her cat, Wiggles, was stuck in a tree. I rescued Wiggles once before almost two years ago, and Joanie was hoping I could rescue her again very soon. Since I could not get there before dark, I told her I would be there in the morning, but Joanie was worried about Wiggles and also had important plans for the next morning which could not be changed. She asked if I could do it that evening, and, after she sent a picture of the tree to me that appeared reasonably easy to climb, I decided I would.
The tree looked worse in person than it did in the picture. It was covered with poison ivy vines with leafless sprouts radiating in every direction all the way up the trunk of the tree. The tree was also crowded between other trees which made getting my rope installed more difficult. But Wiggles and Joanie were patient, and I was soon climbing up to Wiggles. Fortunately, Wiggles was on a short limb and could not go far away from me, so she stayed where she was but was not particularly happy about it. From her last rescue, I knew not to even attempt to use the carrier, so I was prepared from the start to bag her. After I reached her and she let me pet her, I put her in the bag and brought her down.
Wiggles has a good life there with her two littermate sisters, and Joanie and husband, Mike, both take very good care of them. Her world will be a bit upset soon as the whole family will be moving to another state, but I have no doubt that Joanie and Mike will do everything they can to make the move as gentle as possible. So, if Wiggles has any plans for a third rescue, it looks like it will have to be done by someone else. Good luck, Wiggles. 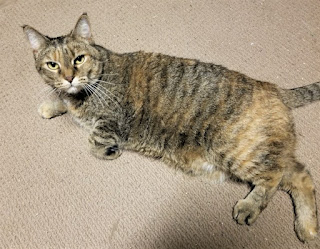