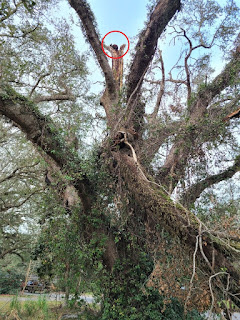 The trend of rescues in sketchy trees continued with the next two rescues. First, there was Pretty Boy, a sweet, two-year-old Siamese in Pass Christian, Mississippi who got stuck at the tip top of a dying Live Oak tree that had been damaged by one of the recent hurricanes. The high winds broke the top off the tree leaving a split half of a rotting stem. Pretty Boy was perched on top of that stem, and he was not happy. His owner, Shannon, was even more distraught, as this kitty was very valuable to her. Pretty Boy had already spent one long night in the tree, and I arrived an hour before sunset to see to it that he did not spend another night there.
I struggled awkwardly to reach Pretty Boy, and I can't say I was comfortable putting so much trust in that dead stem even with several other backup ropes holding me to other parts of the tree that were more sound. I climbed only as close to him as I needed to get him and did not spend much time making friends with him. I just grabbed him and bagged him and came down as quickly and safely as possible.
Shannon cried as I handed Pretty Boy to her as all the stress of the entire ordeal finally dissolved and relief set in. She loves this little Siamese and had been in fear of losing him. I already know how valuable these rescues are to people, not to mention the cats, but it is always rewarding to me to be reminded, once again, just how meaningful and valuable these rescues can be. 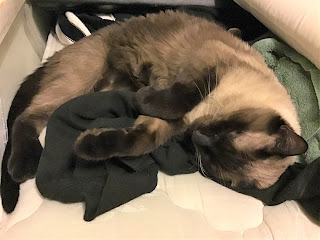 The second rescue was for Iris, a sweet, seven-month-old tortie in Livingston. She, too, chose a sketchy tree to climb and had been there one night. The bottom part of the tree appeared to be live and fine, but the top part had died and broken off, and it was not clear just where the boundary between live and dead tree was. To reach Iris, I would need to use a branch in the questionable zone, so I chose to use a very tall Sweet Gum tree close to it instead.
I climbed the Sweet Gum tree until I was above Iris' height and then threw a rope into Iris' tree well above her. I wanted to use that rope to pull and lower myself over to her. I had some trouble getting my rope where I wanted, and Iris was watching me impatiently. She finally had enough of my incompetence and decided to climb down on her own. She did a great job too. She went backwards and in control all the way down until her owner could pick her off the tree. After Iris settled down and enjoyed a can of food, they put her in a carrier and took her home. Iris made me look bad, but if that is what it takes to get her down, I can live with that. 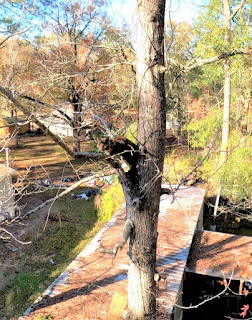 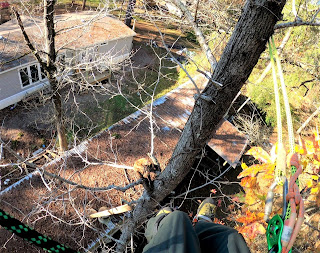 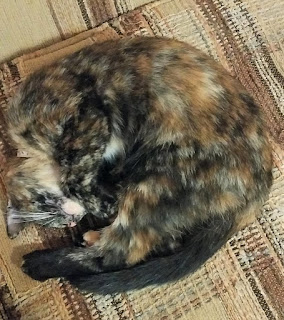