Same old story. Loose dog chases cat. Cat escapes up tree. Cat gets stuck in tree. Cat owner frets.
It's a frequently recurring story, and it's the story of these next two rescues for Midnight and Myshka. If those names sound familiar, it's because, just ten days ago, I posted about two rescues for cats named Midnight and Myshka. Myshka is the same cat as before, but Midnight is a different Midnight. However, this is the second rescue for Midnight who I rescued just one month ago. Got that?
The Midnight of this rescue is the sweet, one-year-old, black kitty who lives in Picayune, Mississippi, and she got stuck in the same tree as before and had been stuck for two nights. She was not as high as before, but, unlike the last rescue, the tree had foliage this time which kept her well hidden and shaded. I always worry about how a cat will react to seeing me in the tree the second time, but Midnight readily greeted me and let me pet her. Since she had a negative reaction to the sight of the carrier last time, I simply proceeded to bag her, and she handled it very well. I set her in my lap for some reassurance and petting through the bag and then brought her down. I was very happy to have an easy rescue for a change. 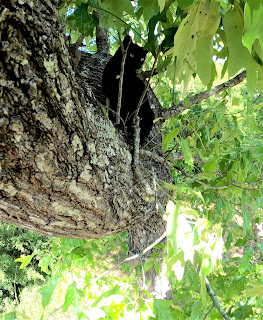 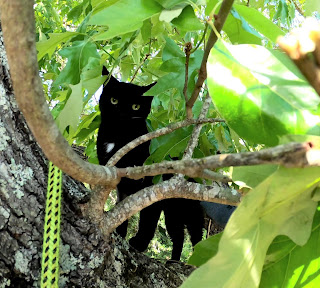 As for Myshka, the two-year-old Russian Blue in Baton Rouge, it was the same loose dog that chased him, but it was in a different tree where he was stuck for one night. This time, Myshka climbed a very large oak tree, and when I first saw where he was and remembered how terrified he was of me the first time, I thought this would be a nightmare rescue. Myshka had many extremely long limbs he could use to easily walk far away from me, and it would be very difficult to catch up with him. To add to the stress, severe thunderstorms were approaching, and the forecast was for more of the same for at least a few days. We had a very small window of rescue opportunity here, and I needed a huge window if not a very large garage door.
Myshka was crouched down on a large limb facing me and being very quiet and still. I climbed up to him slowly and calmly while hoping for a miracle reception from him this time. To my surprise, he stayed there without moving while I gently and slowly approached him. He would utter a weak meow of protest when I got too close, but he did not look at me or move otherwise. This was not what I was expecting, and I was pleased. I spent some time there trying to gain his trust while making small micro-steps of progress over time. Then I began to hear thunder in the far distance and knew our time was running out. I was very pleased when he allowed me to touch him, so I prepared the bag on my arm and petted him some more. I pulled him off the limb and pulled the bag over him and then set him in my lap for some reassurance. He took it all very well, and this rescue went much easier and faster than I expected. It's a good thing too, because the storms were only minutes away.
I don't know why he was so afraid of me the first time but not the second time. Perhaps I did something wrong in my approach the first time. Perhaps he just felt different this time. Perhaps it was just a matter of timing. Perhaps the only explanation we need is this: he's a cat. 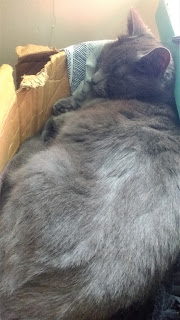