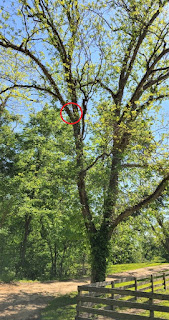 Poor Smudge was stuck in that tree for nine long days. His gray, Russian Blue coat blended in well with the bark of the vine-ridden tree, and it took a long time for Judy to find him in this isolated tree near her rural home near Natchez, Mississippi. Judy spent agonizing days trying to get Smudge down and enlisting the help of everyone she could imagine, but nothing worked. Through it all, this ten-month-old kitty came down a bit and went back up a few times, but he could not figure out how to go all the way down.
When I arrived, I could hear him crying desperately for help, but it took me a while to see him. He sounded like he would welcome anyone with any kind of help at all, but when I installed my rope in the tree above him, his cries changed to cries of fear. He became so frightened that he climbed down the stem of the tree almost ten feet. I thought he might come all the way down, but he stopped in a fork about 30 feet high and stayed there. I delayed climbing up to him to give him some time to calm down, and, after a few minutes, he did just that. 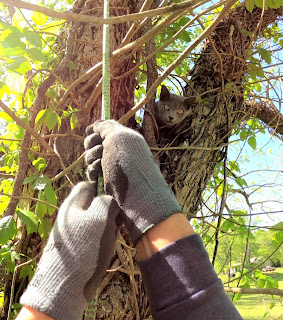 I climbed up to him slowly through a continuous onslaught of poison ivy shoots while stopping frequently to break them out of my way. I was delighted to see that Smudge appeared ready to welcome me. He readily sniffed my hand and remained relaxed as I rose up to his level. I petted him, and he pushed his turned head into my hand. This was such a welcome relief to me after rescuing so many scared cats recently.
We spent a minute making friends up there in the tree, and then I gave him an opportunity to walk into the carrier. He was not interested. He wasn't bothered by it. He just simply saw nothing of interest there. I put the carrier away and prepared the cat bag. By this time, Smudge began to show some signs of wanting to step onto my lap. I love lap cats, and I wanted to encourage this. I opened the cat bag and laid the bottom of the bag on my lap with the gathered sides of the bag hanging off my lap. After a minute of encouraging Smudge to step onto my lap, he did so and was now standing on the bottom of the bag. I simply pulled the bag up around him and secured him inside while calmly reassuring him. This is my favorite way to bag a cat. 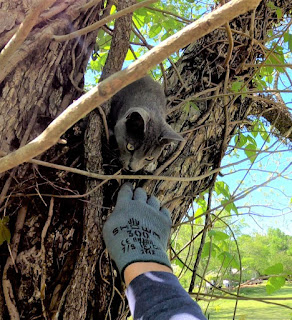 I brought him down and handed him to Judy, and she walked him home to release him. Other than being a little skinny, he showed no signs of being stuck in a tree for nine days and settled back in as if nothing ever happened. Judy sent a close-up picture (below) of him to me later. 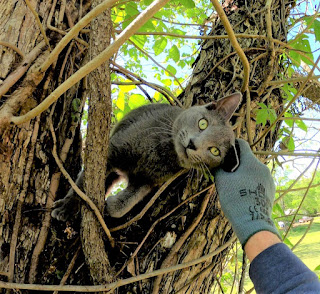 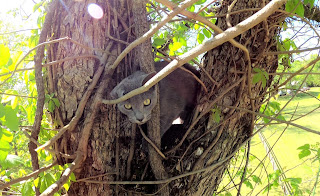 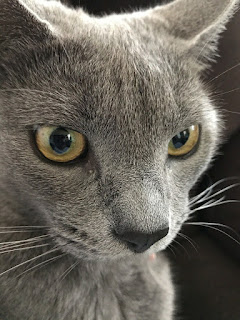