Lucky is a cute, one-year-old orange tabby boy with with a very docile and relaxed disposition. Nothing seems to bother him or frighten him, and that is just the best type of cat to rescue in a tree. Lucky got stuck in a small, sketchy tree in his Geismar backyard, and he was stuck there for three nights before Brooklynn found me. When I arrived, Lucky was draped over the top crotch of the tree with his legs dangling. His eyes were closed, and I think he was either sleeping or just plain tired.
While there were a couple good places to install my rope up high in the tree, they were much too close to where Lucky was resting. I didn't want to scare him or risk hitting him with the weighted bag, so I chose instead to set my rope on the branch well below him and work my way up to him from there. Once I reached him, he gave me a welcome greeting and began to rub his head on the tree. He was very cute as he squirmed around in place a good bit, and he would often hang his head upside-down while looking at me and speaking to me. He let me pet him and was clearly very comfortable with me. While he waited for me to get in a better position, he kept squirming in place, talking to me, and reaching out to touch me. 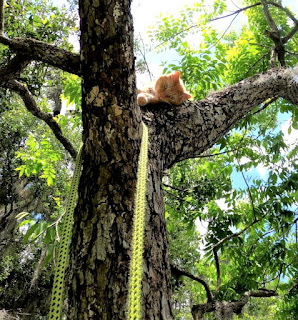 With Lucky so relaxed, I thought he would be willing to walk into the carrier. I held it up to him, but he was not interested. I opened a can of food, gave him a bite and then put the food in the back of the carrier. Again, he was not interested in going inside. I pulled the food out and let him have a few more bites while I petted him and pulled the carrier up to him. After I pushed the food to the back, then he was more willing to go inside. He thought about it a few seconds and then slowly stepped inside. I tucked his tail inside and closed the door.
I brought him down and handed him to Brooklynn who took him inside the house and released him. Rescues for kitties like Lucky are great fun for me. He's friendly, he's relaxed, he's cooperative, he's trusting, he's funny, and he is so darn cute and sweet. What's not to like? I made a video of his rescue (below) so you can see for yourself. Thank you, Lucky, for an enjoyable rescue. Let's do it again sometime. 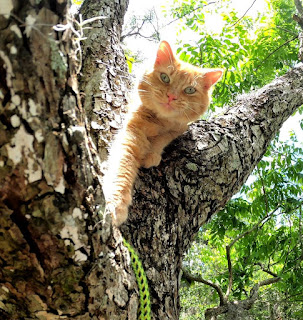 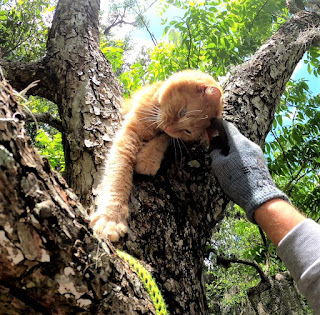 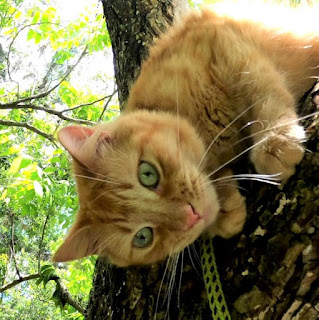 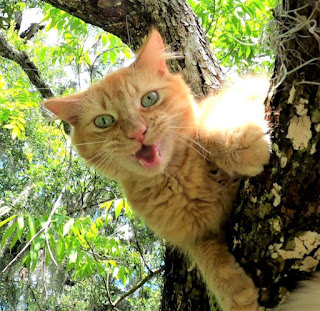