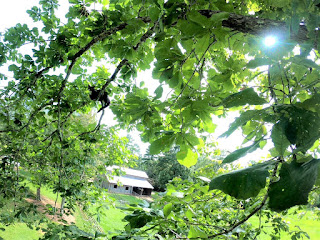 My wife and I were getting ready to take a short day-trip to Mississippi to celebrate our wedding anniversary when the phone rang. The caller, Si, told me that his cat, Oscar, had been stuck in a tree for a full week and asked if I could help. I have a very understanding and flexible wife, and I know she would not want me to leave that cat in the tree for another day, so I told Si that I would be there in an hour. My wife and I decided to do our little trip the next day, so off I went to rescue this kitty in need. 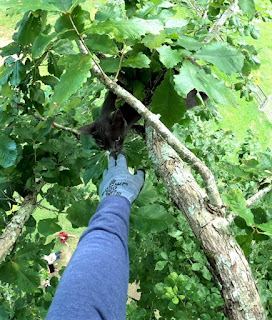 Oscar belongs to Si, Kimberly, and their three adorable daughters, and Oscar was stuck about 35 feet high in a Cow Oak tree on the family's rural property near Greenwell Springs. Oscar is a very friendly, one-year-old, gray and white cat who is very well loved and treasured by the entire family, and he is special to them not only because of his sweet personality, but also because he has a cleft palate, though Oscar does not know that or care. The whole family had been desperately trying all week to coax him down, and they were all very excited to see me arrive to put an end to this stressful drama.
Since Oscar was described to me as super friendly and not easily spooked, I was expecting this to be a quick and easy rescue. Unfortunately, however, installing my rope in the tree frightened him more than I expected, and he seemed to hold that against me as I climbed up to him. He was near the end of the limb and crying in distress, and I could hear his distress intensify each time I advanced closer. I stopped frequently along the way to reassure him that I was friendly, but he was never persuaded. 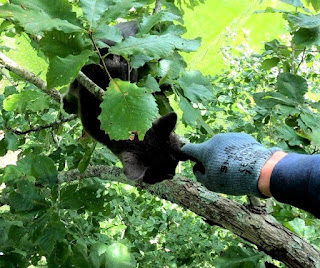 Oscar was about ten feet away and could not go much farther out on the limb. I was unable to convince him to come to me, so I prepared to go out to him slowly. I inched my way out to him trying to reach my hand out to him and convince him of my good intentions, but he remained unconvinced and would not budge from his spot. It was clear to me that I needed to get close enough to touch him and let him sniff my hand before he would begin to trust me, but the limb was already bending under my weight, and I could not get my rope in a position high enough to take much of my weight off the limb. I was sitting on the limb and stretching out as far as I could, but I still could not quite reach him or convince him at least to stretch a little toward me. I moved out the limb as far as I dared and was finally able to reach my hand close enough to him where he could sniff it. I stretched my finger out as far as I could and was barely able to stroke his head. That was the breakthrough Oscar needed. He relaxed a bit and stretched a little closer to me. I petted his head and cheek with my finger, and I could see that I was now getting through to him. Oscar was trusting me more and was ready to come closer to me. 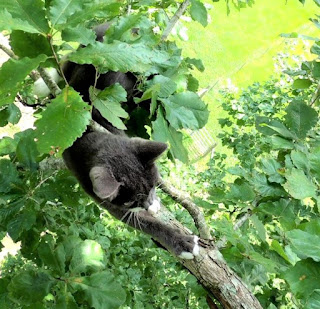 I backed away from him a bit to a safer part of the limb, and was happy to see that he was now moving toward me. He came closer, and I petted him some more. Now I could see his sweet personality coming through. He stayed close as I prepared the cat bag on my arm, and, after another minute of getting acquainted with each other, I put him in the bag.
I brought him down and gave him to one of the daughters, and she took him inside the house to release him. Oscar ran out of the bag and hid at first, but he came out later and was glad to be back home and have some food to eat and a soft bed. He got a lot of rest and was soon settling back into his routine with his loving family, and, the next day, my wife and I took our short trip to celebrate our anniversary. So what if it was technically on the wrong day. We enjoyed it more knowing that this sweet cat and his delightful family were all happily and safely back together again. 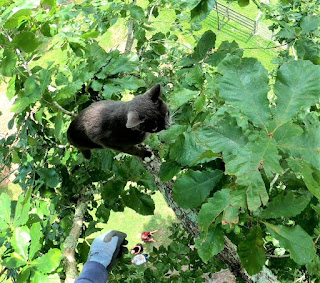 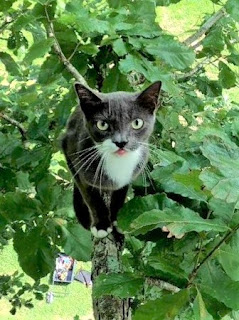 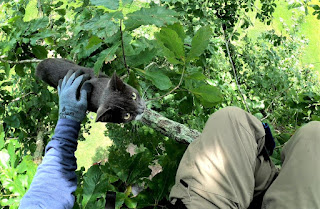 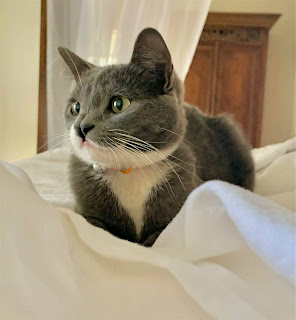