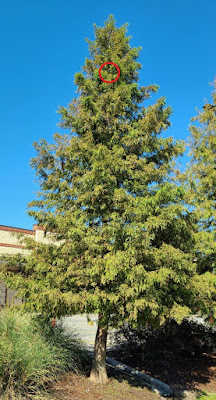 Amy and Joshua were in the drive-through lane at the Starbucks in Denham Springs when they heard a kitten crying. As cat-lovers, this was not something they could ignore, so they got out and looked all around until they finally located the kitten at the top of a small Cypress tree which was between Starbucks and the Chick-fil-A next door. Needless to say, this is in a busy commercial part of town, and this is no place for a kitten. After a few phone calls, Amy and Joshua found me, and I said I could be there in 30 minutes. They were so concerned about this kitten that they were willing to wait another 30 minutes for me to arrive and even more time for me to bring the kitten down out of the tree. On top of that, since this kitten was unknown and had no place to go, they agreed to take it home and adopt it into their family.
After I arrived, another person from one of the other restaurants came out and told us more of the story about this kitten. She said that someone found the kitten in the middle of the road the night before, so they picked it up and came into the parking lot to figure out what to do with it. The kitten escaped them and then hid under the hood of someone's car. They worked to get the kitten out, and that is when it escaped and climbed up the tree. 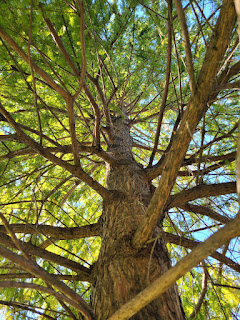 Because of the dense foliage, we could not get a good look at the kitten. I did not know what color it was or how small it was until I had climbed within reach of it. I was surprised to see that the big voice I had been hearing cry out so loudly belonged to such a tiny kitten. And what a cutie he was! He was a gray tabby with white on his nose, chest, toes and the tip of his tail. He was tiny, and he was scared, so he gave me a tiny kitten hiss a few times as a warning. I did my best to appear friendly, and I was pleased to see that he was not trying to get away from me. I plucked him off the limb, put him in the bag and brought him down. Once I grabbed him, he did not move or make a sound until he was down and inside the car with Amy. 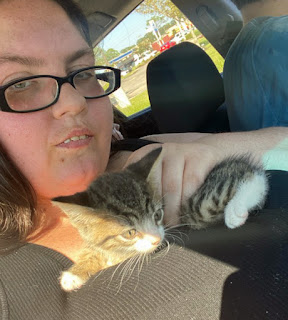 Amy pulled him out of the bag, cradled him and gently reassured him that he was safe. They took him straight home to introduce him to his new territory, and he is beginning to settle in. This little kitten was lucky that someone saw him in the road the night before and moved him out of danger. And he is lucky that Amy and Joshua came the next day and heard him and cared so much that they stayed with him until he could be rescued. And he is lucky that they gave him a loving home. So it is fitting that they named him Lucky. Good luck to you, Lucky, and thank you, Amy and Joshua. 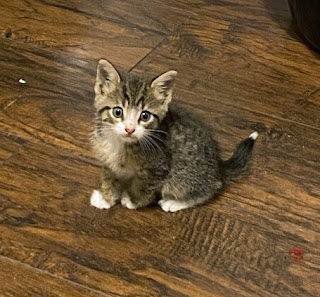