Fat-Fat was fickle. She became so frightened when I installed my rope in the tree and climbed toward her that she climbed all the way to the tip top of the tree, but when I finally reached her, she was happy to see me. She really is a sweet girl, but she sure made her rescue more difficult for both of us.
Fat-Fat is a two-and-a-half-year-old torby living with Kira near Brandon, Mississippi, and she earned her name because she was overweight when she first came into Kira's care. Kira did not intend to name her that -- it just happened by default -- and Fat-Fat is now sporting a healthy weight. We don't know exactly how long Fat-Fat was stuck in the tree, but she had been missing for six days, and Kira found her stuck in the tree three or four days before I arrived.
When I arrived, Fat-Fat was resting on a limb about 40 feet high where indicated in the picture by the green circle. When I began to install my rope on a limb below her, she became frightened and climbed higher. As I climbed up the rope toward her, she climbed even higher and did not stop until she ran out of tree to climb. At that point -- as indicated in the picture by the red circle -- she was about 60 feet high. 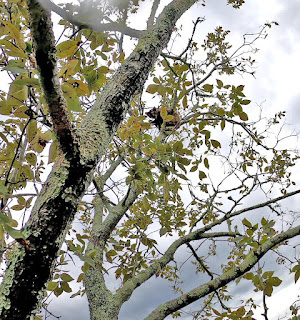 Once I finally reached her, she was instantly as sweet and friendly as she could be. I did not have to earn her trust. She stretched toward me, rubbed her face on a limb, and let me touch her. She wanted to come closer to me, but there was a five-inch stub pressing against her chest, and there was a lack of places to put all four of her feet to keep her balanced while going around the stub. When I finally understood her problem, I extended one arm and grabbed her limb firmly to give her a comfortable pathway toward me. I encouraged her to step on my arm, and she did so. With that she was able to get her back legs into a better position and come a few more inches closer to me, and then I was able to reach her well enough to grab her by the scruff and put her in the bag.
I brought her down and handed her to Kira who walked her home and released her inside. Fat-Fat was glad to be home, and Kira was happy and grateful to have her safe at home again. After filling her belly, Fat-Fat was happy to have a soft, comfortable place to sleep and recover from the misery of the past few days. 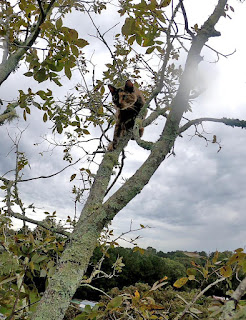 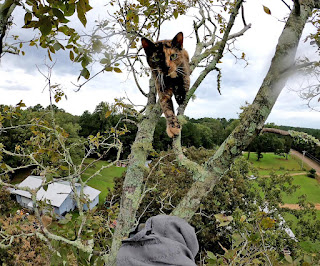 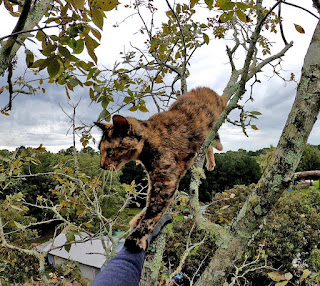 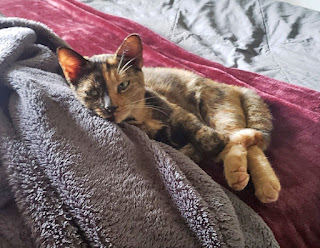