If there were a meter which could measure the degree to which a cat owner worries and frets about her cat when it is stuck in a tree -- let's call it a fretometer -- then Jill's reading would be in the Very High range. I get it. If I were in the same position, my fretometer reading would be even higher. My greatest reward whenever I rescue a kitty in a tree is relieving the suffering of both the cat and the owner, and, as is often the case, this owner suffered more than her cat did. So, I will just say that rescuing Handsome was very rewarding.
Handsome is Jill's five-month-old Siamese kitty, and she gave him that name because he was the prettiest cat she had ever seen. Handsome managed to slip away from Jill's watchful eye, and he began to climb a tall Pine tree in the corner of the back yard. The first limb he encountered was 45 feet high, and he perched there and slowly came to the realization that he was stuck.
Jill wasted no time in working to find a way to get Handsome down, but, when all her efforts failed, she found me and called. I could hear the urgency and distress in her voice and told her I would be there as soon as I finished another rescue near there. We were both concerned about the severe weather that was forecast for the afternoon, so it was important that I complete both rescues that morning. 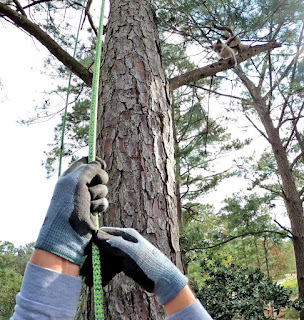 The first rescue went quickly, and the weather was holding up well, so I continued on to Slidell to rescue Handsome. The rope installation caused him some concern, but, otherwise, he appeared to be doing very well. When I climbed up to him, he was relaxed and ready to welcome me. He came toward me to greet me and sniff my hand for a long time, and then he let me pet him. As we visited there for a minute, I began to notice his huge feet. This boy is a polydactyl, and he has an extra toe not only on his front feet but also on his back feet as well. While I marveled over his feet, he stepped onto my lap. I could have let him ride down to the ground on my lap, but we were a bit higher than I like for that, and there was a fence below us. Instead, I held the carrier next to him, and he stepped inside without any hesitation. 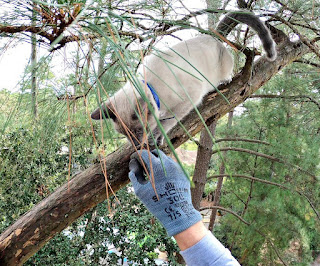 Back on the ground, I handed him to a very happy and relieved Jill who took him inside, and we still had plenty time left before the weather turned bad. And I am happy to report that the fretometer reading for both Jill and Handsome is now in the Extremely Low range. 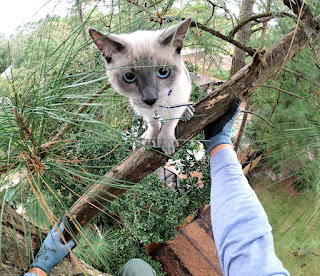 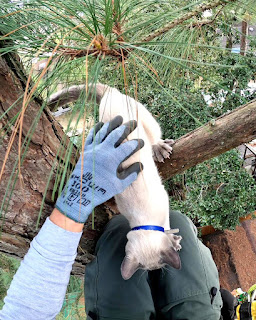 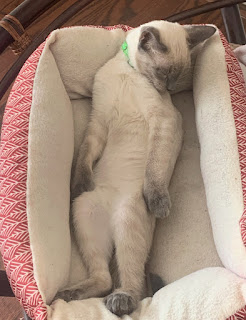