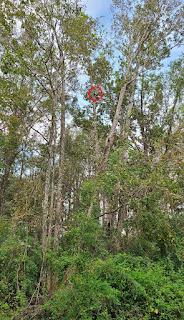 Sylvester got himself in a spot that was miserable for both him and me. He was stuck about 40 feet high in a tree in the woods behind his home in Folsom, and he had been there for two nights when I arrived. I had to spend several minutes cutting and clearing a path through the undergrowth just to reach the tree, but I had an army of gnats and mosquitoes helping me all along the way. The tree had very few substantial limbs, so I had few choices for places to install my rope. Considering all the things that could have gone wrong with installing my rope in this situation, I really was very lucky that it went as well as it did. Still, I had been there over an hour and was soaking wet with sweat before I was even ready to begin climbing the tree.
To make matters worse, Laura told me that her Sylvester always runs away and hides from strangers, so I was not expecting a warm reception from him in the tree. I needed to approach him as calmly and gently as possible, so that's what I did. 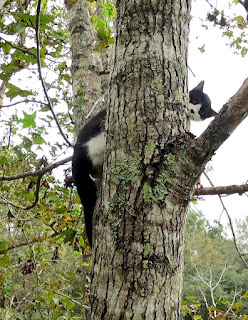 As I drew closer to him, I could see the concern on his face, but he was staying in place. I did my best not to alarm him as I inched closer and closer to him. Once I was barely within reach, I stretched my hand out to him, and he bent down to sniff it. I was very relieved to have passed the first sniff test, but we weren't buddies yet. I came closer and continued to reach my hand out to him for a sniff and then a light touch of his cheek. Soon I was able to rub his head, but, while he was accepting and tolerating my touch, he did not appear to be enjoying it. We still weren't buddies yet, but we were close enough that I could bag him, buddies or not.
I prepared the cat bag on my arm and then made the mistake of reaching that same hand out to him again. This time, he sniffed and reacted with flattened ears and a hiss. He didn't explain the reason for this sudden change of heart, but I suspect he was not happy about the scent of other cats from my cat bag. Now, I was worried about running out of time before he decided to climb higher to get away from me. 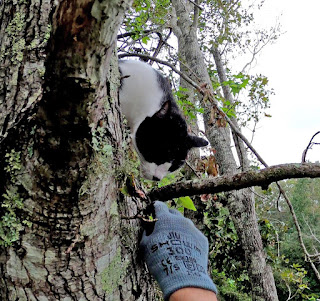 I moved the cat bag to my other arm and petted and scratched his back end from behind where he could not sniff my hand. I gradually worked my hand closer toward his head and then grabbed him by the scruff and pulled the bag over him. He didn't complain or struggle, and I secured this boy in the bag and brought him down.
Laura took him inside and released him, and Sylvester was happy to settle back into a comfortable home. Laura sent this picture of him sleeping to me later that day. 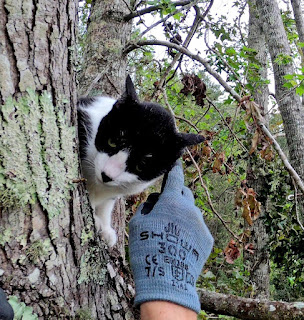 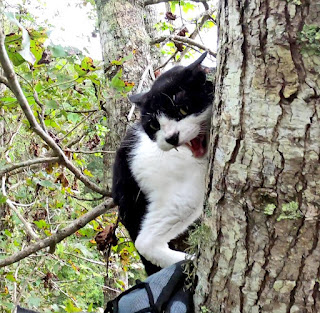 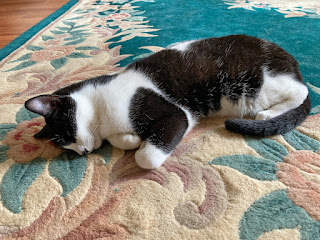