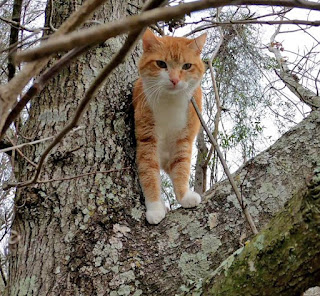 I had two rescues scheduled for the morning, and Cairo in Prairieville was the first. Cairo is an orange-and-white boy who has been stuck over 40 feet high in a Sweetgum tree just inside the woods behind his house. Cairo was a friendly boy, but he was not a cooperative boy. He greeted me, and we made friends right away, but, after that, I had trouble getting his attention. He would sit there with his back to me rubbing his face on the vines or walk three feet out the limb and back, but he would not step on my lap or into a carrier. When I tried to pick him up and place him in my lap, he protested and squirmed out of my hands. After patiently trying over and over to secure him in a gentle way, I gave up and just grabbed him by the scruff and pulled the bag over him. He wasn't happy about that and fussed a bit on the way to the ground, but he was happy once he found himself back home. 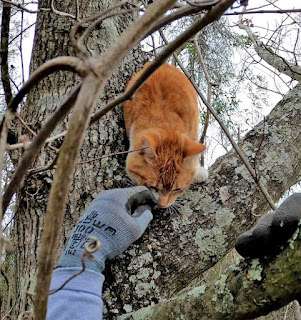 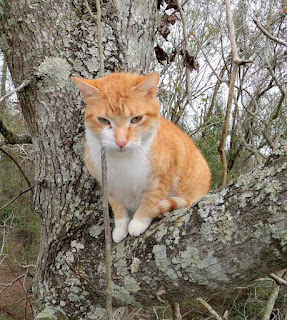 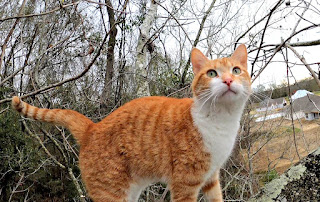 After Cairo, I went back to Baton Rouge to rescue Vera who had been stuck overnight in a Live Oak tree in her own back yard. Vera is a pretty, four-year-old Siamese who, like Cairo, made friends with me quickly but refused to step on my lap or go into a carrier. When I first approached her, she appeared to want to step on my lap, so I prepared the cat bag on my lap so I could gently bag her. I gave her many opportunities and encouragement to step on my lap, but she never showed any more interest. However, once I removed the cat bag, then she wanted to get on my lap. It was the scent of other cats on the bag, especially the fresh scent of a stressed Cairo, that repelled her. With that scent out of the way, she readily stepped on my lap, and I put her in the bag. Now, I wonder if the scent of other cats on the bag is what deterred Cairo. I think I need to start washing the bag after every use.
It's a shame that I have no other pictures of this blue-eyed beauty to show to you, but the camera battery died shortly after I started to rescue Vera because I spent so much time with Cairo. 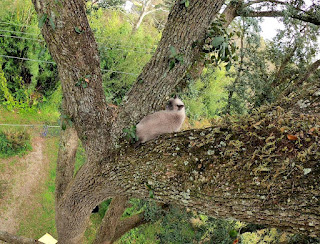 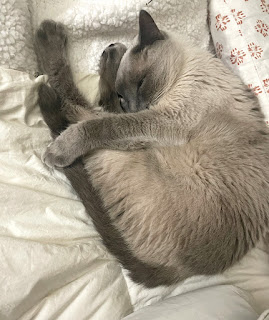