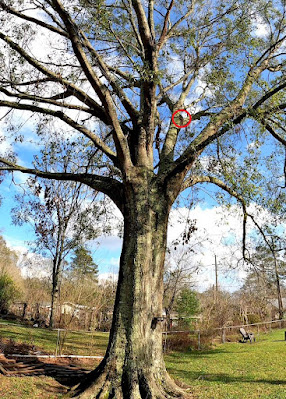 After I finished rescuing the unknown white cat in Picayune, Mississippi, I went straight from there to rescue another unknown black cat in Denham Springs, Louisiana. This time, however, a turn of good fortune led me to the cat owner. When I arrived, a boy was playing in an adjacent back yard, and he noticed me and the attention I was paying to the cat in the tree. He told me that the cat was his, that he had been stuck in the tree for one night, and the cat's name is Milo. He had been worried about Milo but didn't know what to do. His father had called the fire department, but they could not help. He was very happy to learn that I was there to rescue his cat, and I was very happy to know now what to do with the cat once I brought it down.
Six-month-old Milo is not one to just sit quietly and accept his fate of being stuck in a tree like the unknown white cat in Picayune did. No, Milo is the polar opposite and started crying loudly and constantly begging anyone to help him. The whole neighborhood could hear Milo complaining, and Milo made sure that he would not be ignored or forgotten. Fortunately for Milo, one of the neighbors, Bella, heard his cries and went to the trouble of finding him and the property owner so I could get permission to rescue him. When I first arrived, I could hear Milo right away, and I knew where to look for him. When I introduced myself to him, he cried intensely to me, and when I walked away to retrieve some gear, his cries grew even more intense. It's a heart-breaking sound to me, but it sure does feel good to be able to do something about it. 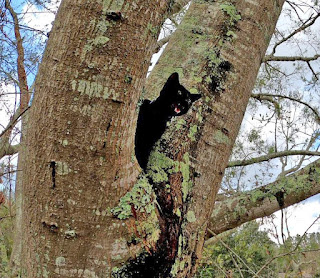 I wasn't expecting any trouble from Milo, and I was right. When I climbed up to him, he was happy to see me, and I could tell he would readily step onto my lap. I petted him a few minutes and reassured him as best I could, and then I prepared the cat bag on my lap. As expected, he quickly stepped on my lap, and I enjoyed holding him there for a minute before pulling the bag up around him.
I brought him down and handed him over the fence to the boy next door. He was very excited to have Milo back down, and I enjoyed watching as he gently set the bag on the ground, slowly opened the bag, and, with a high-pitched, giddy laugh, reached inside to lift Milo up into his arms and hug him. He set Milo back down on the ground, and Milo, with his tail straight up like an antenna, followed him closely as they both trotted across the yard. Oh, how I enjoy watching sweet reunions like this. 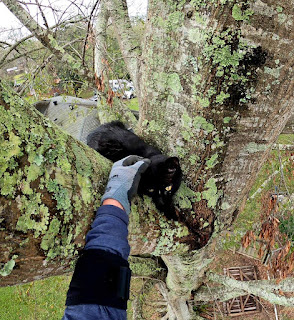 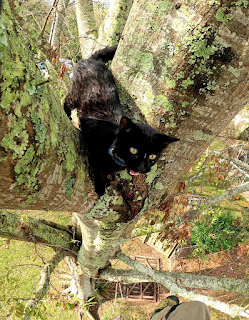 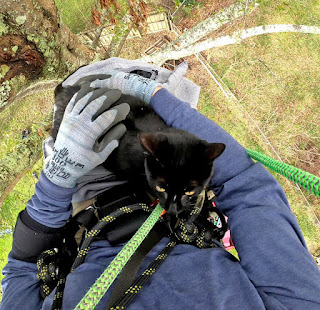