Jason found this black and white cat stuck in the large Oak tree by his home in a large mobile home park in Geismar. There are several loose cats in this mobile home park, and, while he did not know this cat, Jason had seen it several times before and assumed it belongs to one of the many nearby residents. From the way the cat cried to me down below, he appeared to be begging for help, so I was expecting him to be friendly and cooperative. When I climbed up to him, however, he became very afraid and defensive and responded to me with flattened ears and hissing. He was perched in the fork of two very large branches, but when I approached him, he quickly pushed himself out, turned his back to me and stepped to the opposite side of the large branch. He was facing away from me, and I reached my hand through the fork and gently patted and scratched his lower back to reassure him and show him that I was friendly. He accepted my gesture of friendship, but it was going to take much more than that to earn his trust.
I leaned around the large branch so I could approach him from the other side, and I worked with him a long time before he began to relax with me and trust me at least somewhat. He was a hard-sell, but he eventually let me pet his head and face. From my awkward position leaning around the large branch, I had only one way to secure him, and that was with the carrier. I presented the carrier to him several times, but he refused to cooperate each time. I had to be more patient with him than usual, so I kept giving him a chance to go inside the carrier after giving him some reassuring pets and sweet talk. We repeated this sequence numerous times before he, at last, decided to step inside. I closed the door and took him down to the ground. 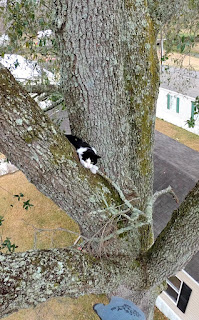 Since he had a collar and had been seen in the area many times before, I intended to let him go, but I still wanted to check him for a microchip first. That is harder to do inside a carrier, especially since he was now determined to bust out of this jail. I managed to reach the microchip scanner inside the carrier and scan the top of his neck, but that was about all. With the door cracked open, he saw an opportunity, so he pushed his way through the door and ran off before I could do a thorough scan. He had been in the tree only one night, so he was in good shape and, hopefully, went home. 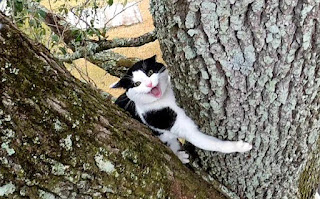 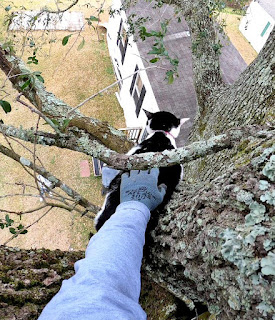 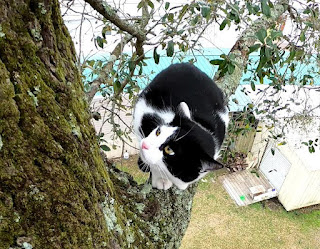 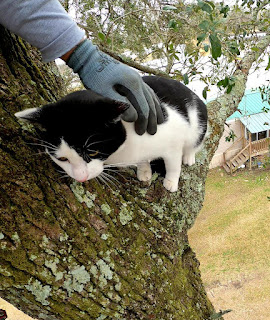