Jett was stuck in a Pine tree for four nights, but sometime during his fourth night or early the next morning before I arrived, Jett moved to the nearby Oak tree whose limbs extended into the Pine tree. I'm sure glad he did, because, when I looked up into the Pine tree where he had been, all I could see was a dense mass of vines. So I was happy to see that he had moved to the Oak tree where it would be easier to reach him even though it, too, had quite a few vines of its own. In fact, all I could see of Jett was a black mass in the muscadine vines, but his frantic cries for help made it clear he was there.
Jett is eleven months old and a super-friendly boy who was desperate for a rescue, so he could not have been more cooperative. Even before I introduced myself, he was ready to go with me, so all I had to do was spread the cat bag over my lap, and he readily stepped onto it. I pulled the bag up around him and took him down. He sure was allergic to something up there though, because he sneezed several times during our short visit. That's why his nose looks so messy in all his pictures. 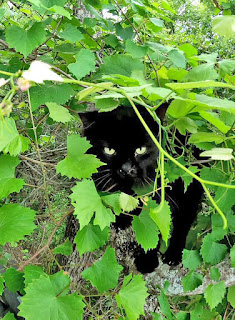 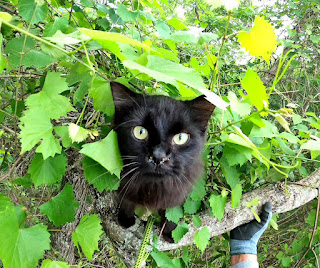 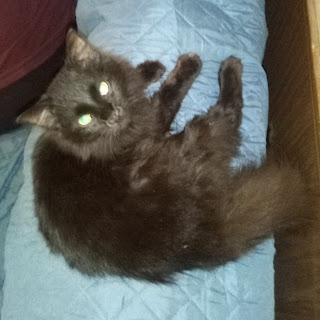