This is a story about a sweet cat that got stuck in a tree, so I don't want to talk about the nasty tree he was in, how it was smothered with a wild variety of vines, or how difficult it was to climb. I don't even want to mention how I could not see the structure of this crooked tree or find any suitable places to install a rope, or how the vines were so dense that I could not examine the junctions of the tree to see if they would support my weight. No, this is a story about a cat, so let's not get bogged down in the petty details about how the vines tested my patience and hampered my climbing by getting caught on my feet and gear and even prevented me from turning my head, or how some of the vines were so tough that I could not even break them out of my way. Talking about all the troubles and miseries I had trying to climb the tree would just take the focus away from the cat, so let's just not talk about that.
Instead, let me tell you about a three-year-old boy named Domino who, for reasons unknown, climbed a tree just on the other side of his back fence. That lot behind his house is overgrown, and the fence-line, volunteer tree that Domino chose to climb was thin and only forty feet high. Domino could have stopped in a large, comfortable resting spot about 30 feet high, but he went all the way to the top and did not know how to come back down. He was not visible most of the time because of all the foliage, but, once in a while, he got on a perch where he could poke his head above the foliage and talk to Sarah on the ground below. He had spent two nights up there before I arrived to rescue him. 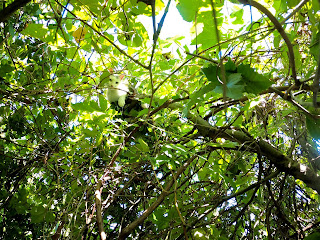 I was pretty sure which tree he was in, but I wasn't positive because I couldn't see Domino from the ground. It wasn't until I climbed about 30 feet high that I saw him for the first time. He was concerned about me at first, but he let me make friends with him fairly quickly. He reached a paw out to touch my outstretched hand, and that got us off to a good start. He eventually came down his limb to get closer to me, but he could not go past the point where the limb curved downward too steeply. If I had had a carrier with me, I probably could have easily enticed him inside from that point, but it was unthinkable to bring a carrier into this thicket of vines. The only way I had to secure him was to put him in the cat bag. I couldn't get in a position to make a lap for him, so my only option was to grab him by the scruff and invert the bag over him. His back end was too entangled in the vines to pull him away freely, so I really needed him to come down that steep part of the limb at least a little bit. It took some time, but I eventually got him to come down far enough to get his back end out of the tangles, and I grabbed him by the scruff and secured him in the bag. 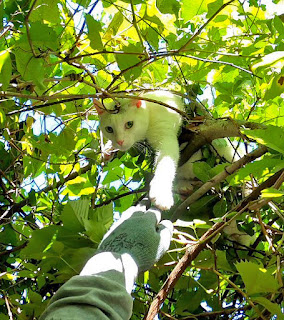 Once we were back on the ground, Sarah took Domino inside the house where her worried four-year-old daughter was waiting for him. Domino was fine, the whole family was relieved and grateful, and I packed my gear and rushed home so I could wash the poison ivy off my body. But let's not talk about that. 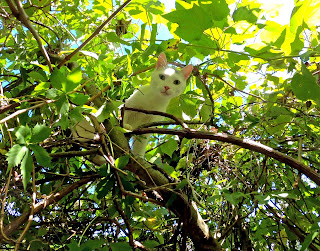 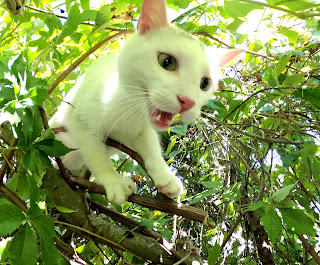 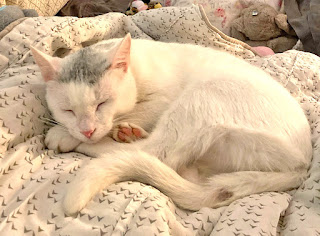