A few weeks ago, Kimberly's two-year-old cat, Thomas, got stuck in a neighbor's tree, but, since he was not very high, a young athletic neighbor climbed the tree free-style (please don't do that!) and rescued him pretty quickly. Kimberly learned her lesson, and, from that point on, Thomas became an indoor-only cat. However, when you have a cat with a fondness for the outdoors and small children going in and out the door, it was only a matter of time before Thomas found an opportunity to satisfy his outdoor urging and escape. Not surprisingly, the result was the same, except, this time, Thomas got stuck in a different neighbor's tree and was much higher. Kimberly did her best to coax him down, but Thomas did not have the courage. Without success, Kimberly called numerous people for help and continued to work to coax Thomas down, but, by the time someone told her about me, Thomas had been stuck in the tree in Picayune, Mississippi for seven nights.
Kimberly warned me that Thomas is not a cuddle cat and typically runs from strangers, so I was not expecting him to run to me and jump in my lap. When I climbed up to the point where I was four feet below him, Thomas fussed at me, stood up, and walked out a limb a few feet to get away from me. He had spent the week at the top of the trunk where the topmost limbs converge, and now he was walking out one of those limbs. He couldn't go very far, but he could certainly get out of my reach. 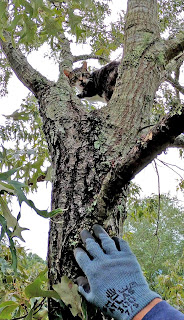 I thought I could make friends with this boy if only he would let me get close enough where he could sniff my hand and, hopefully, let me touch him gently. I scrambled up to the top of the tree, leaned out to him and could just barely reach him. I reached my hand out to him for a proper introduction, and he sniffed it, gave it some thought, and ultimately decided he was unimpressed. My attempts to touch him gently succeeded only in irritating him. I was failing to reassure him as I had hoped, so I decided to see if food would impress him.
He was mildly interested in the food and even ate several bites, but it didn't seem to affect his impression of me. He allowed me, without protest, to pet him on the head while he ate, but that was the only time I could touch him without irritating him. Still, that would be enough for me to bag him, so I prepared the cat bag on my arm. Unfortunately, while I was preparing the cat bag, he stretched his front legs over to another fork in the limb, and I could not securely reach him there. I tried to use the food to lure him back to the other spot where I could reach him better, but I could not get him to budge. When I touched him one too many times, he got irritated, hissed at me, and moved back where I wanted him but only long enough to turn away from me with the intention of going farther out the limb to get away from me. I had to seize both the moment and his scruff at that instant before he got out of reach, and I pulled him to me and pulled the bag over him. In spite of being irritated with me, he took the bagging without fussing one bit. Thomas was secured at last and headed back down to the ground where Kimberly is making special efforts to make sure this never happens again. 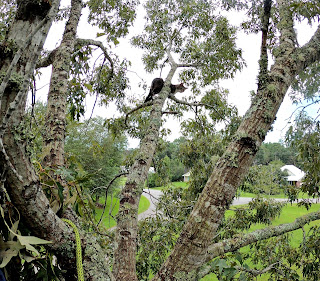 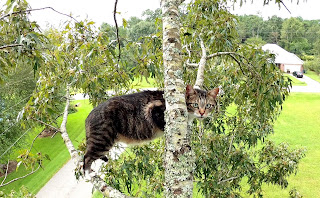 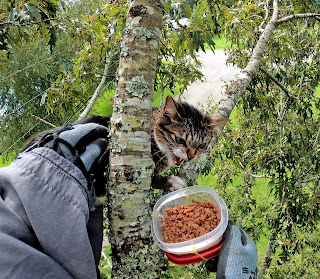 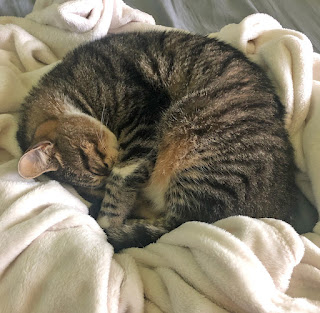