Despite the appearance of inactivity here, cats have been quite busy getting stuck in trees. I took a short trip out of state, and, while I was gone, I got four rescue calls in one morning, all of which, thankfully, resolved thanks to other rescuers. Before I left on my trip, however, there were two rescue calls, the first of which resolved when the cat came down from an electric power pole on its own shortly after I arrived that night. I didn't do anything except watch in gratitude, but when the cat fell the last few feet straight into the owner's arms for an emotional reunion, I felt both honored to witness such a meaningful and beautiful reunion and yet ashamed to be trespassing into an intimate and private moment. I was deeply touched. (No pictures due to the darkness.) 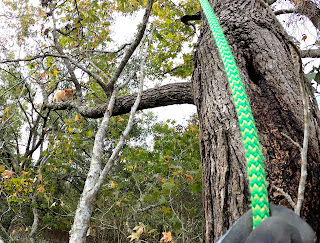 The second rescue was an unknown orange tabby that was stuck in a tree in Livingston for one night. I had to use the rescue-pole to reach him, but he slipped out of the noose and fell. Fortunately, Mike, the property owner, was there ready and waiting with a fishing net and expertly caught the cat in the net breaking his fall and preventing any injury. (Very few pictures due to a camera malfunction.) I returned from my trip to a very challenging night rescue for Kitten, a sweet two-year-old gray tabby in Denham Springs who climbed to the unreachable thin tips of a small tree where I could not go. I managed to get fairly close to her, but I could not get her to come to me because her limb was too steep for her. I partially cut her limb very slowly just to make it lean level so she could then walk to me, but she still refused to do so. Without warning, her limb suddenly snapped, and the sudden tilt of the limb which I was still holding in my hand caused her to fall to the ground. She landed squarely in the center of a tarp which had previously been stretched out above the ground to catch her if she fell, and the tarp slowed the force of her fall perfectly. Kitten ran off to hide, waited for me to leave, and then returned home acting as if nothing had happened. (Few pictures due to darkness.) 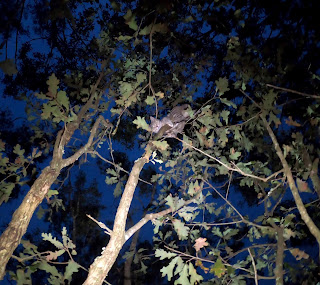 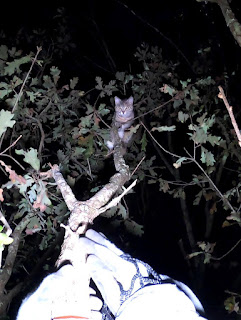 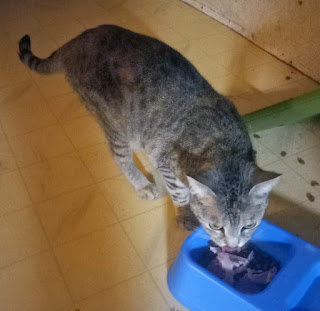 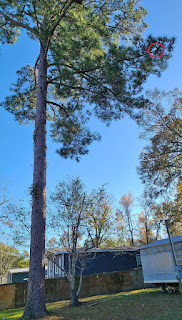 Then there was Ella, a silver tabby that belongs to Bryson, a smart and delightful ten-year-old boy in Denham Springs. Ella was far out at the end of a long limb in a Pine tree, but she made the rescue easy for me by coming to me. She sniffed my hand but had some reservations about me. When she decided to come close to me, I thought she had decided I was trustworthy after all, but she was actually trying to walk past me to jump over to another limb. I decided to act quickly and just grab her before she made this rescue too difficult. I put her in a carrier and brought her down, and Bryson is a very relieved and grateful boy. (Yep, camera malfunction again.) 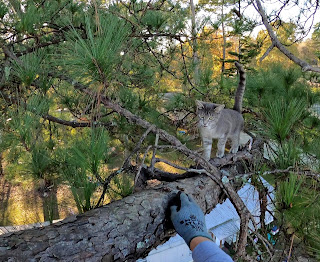 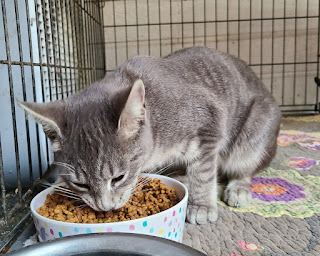