Poor little Kit Kat, a one-year-old orange tabby boy, was stuck 35 feet high in a Pine tree on a rotting stub that was barely over one foot long. The stub was angled upward slightly, so placing his butt against the trunk of the tree and facing away was the only position available to him. He could stand, and he could squat to rest on his belly a bit, but that was all he could do. He was stuck there for two nights before I arrived to rescue him, and he is lucky that this dead stub held him during that time since it was prone to breaking off at any moment. It must have been miserable for him to be stuck there for so long with such limited movement.
If Kit Kat had fallen, there were deadly hazards on the ground below in his neighbor's yard in Baton Rouge, Louisiana. In addition to a fence close to the tree, the ground had been covered with tall bamboo shoots which had been cut leaving stiff, eight-inch long, sharp stubs pointing straight up ready to impale anything that fell from above. There was also a large dog that guarded this territory, and he may have been the reason Kit Kat climbed the tree in the first place.
Fortunately, Kit Kat is a friendly boy, and he lived up to that reputation in the tree. He was happy to see me coming up to him, and we made friends instantly. After proper introductions, I prepared the cat bag on my lap and then encouraged him to step on my lap. He readily did so and settled in there probably feeling relieved to have a large, soft place to lie down. I enjoyed having him there for a minute, and then I pulled the bag up around him and brought him down. I handed him to Lindsey who took him inside where she released him. Later, she sent a picture of him sleeping peacefully and comfortably in his soft bed, and that is exactly what I like to see after a rescue. Kit Kat needed and deserved that relief after suffering on that short stub for so long. 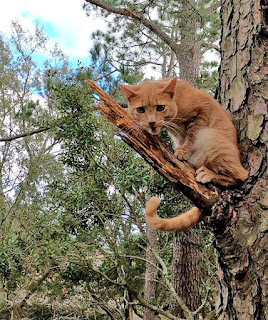 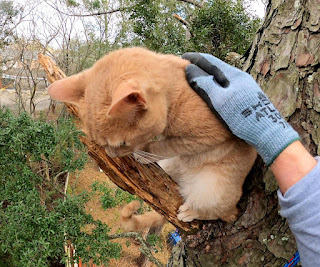 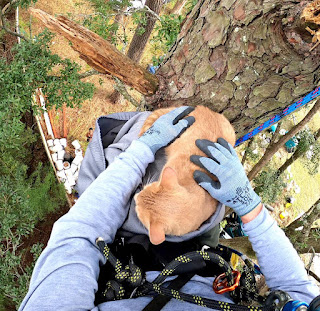