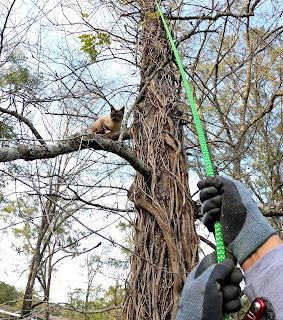 Cats have terrible timing. They seem to have a natural talent for finding the worst time to get stuck in a tree, for example, shortly before you are leaving on a trip, or just as the weather is turning bad. So I was not surprised to get calls for two rescues just before the weather was forecast to be very cold and rainy.

Sagwa was first. Sagwa is a feisty, two-year-old Siamese mix who got stuck about 25 feet high for two nights in a tree in Denham Springs. The weather was fine for her rescue that afternoon, but the weather was expected to turn bad during the night, so there was a sense of urgency to get her down. Sagwa is a temperamental girl, so I had to be careful with her to be sure I didn't offend her or scare her higher up this vine-riddled tree. She went out the limb away from me once I reached level with her, but, fortunately, Sagwa is a food hog, so all I had to do was open a can of food for her, and she came straight back to me. She was such a beast for food that we had some awkward and clumsy moments while I tried to get prepared and in position to put her in the cat bag. I tried to pet her gently while she ate, but she responded with a menacing growl, so I had to back off. Since I did not expect her to step on my lap, I had planned to grab her by the scruff to bag her. After getting those growls, however, I was now getting nervous about doing that. Surprisingly, I found she would readily step on my lap for the food, so I tried to prepare the cat bag on my lap so she could step on that. I tried to pull the bag up around her while she stood on my lap, but she was so fidgety that I could not successfully do it. I did, however, get her a bit desensitized to my touch while she was eating, so I finally bagged her by scruffing her. 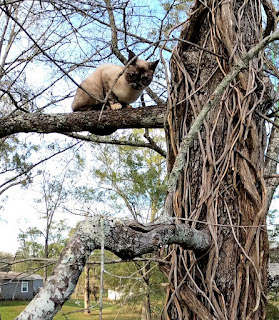 I have so few pictures of her to show because the tree managed deftly and discreetly to press the stop button on my camera while I was climbing. 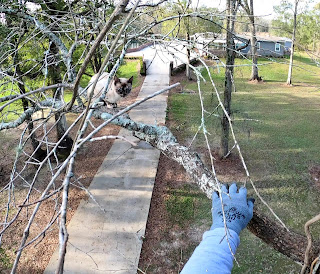 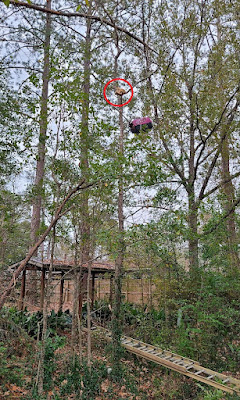 The miserable weather arrived the next day as promised, and, of course, I got a call for a cat stuck in a tree, this time in Greenwell Springs. This cat was unknown but thought to belong to a neighbor. There was a ladder lying on the ground beside the tree, and there was a cat carrier stuck up high in the tree that had been pulled up using a long string. Someone had clearly been trying to rescue this cat, but we didn't know who it was. It was a pitiful sight to see the this orange tabby motionless and curled up in a small crotch at the top of this small and skinny tree in the cold and rain.

Since the tree was small and skinny, I was not sure that the tree would support me at the height where the cat was resting. I climbed the tree and was pleased to see it supporting me well enough, so I continued until I could just barely reach the cat. He did not respond to me at all until I got close to him, and then he clearly felt afraid of me. He looked up for an escape path, but there was little tree left above him, and it was even smaller and more uncomfortable. He stayed in place, and I tried to reassure him, but he did not appear to be convinced. I tried offering him some food, but he didn't sniff it or eat it. Once I inched up a little closer where he could sniff my hand, he seemed to relax, and, from that point, I was able to reassure him. He surprised me, however, by suddenly trying to come straight down to me as if he wanted me to pick him up. He quickly jumped down out of his perch and landed in my lap. I was surprised by this sudden change of heart, but I sure was pleased about it. He settled there on my lap while I petted him and calmed him. I prepared my cat bag, and, as gently as I could, I put him in the bag. By this time, the rain was a bit heavier, and I could hear rumbles of thunder.

Shortly before I secured the cat, the owner happened to come and was happy to see his cat getting rescued. Then we learned the cat's name is Yellow Boy, and he is one year old. I was happy to be able to return this cat to his owner, and the owner was very grateful as he took Yellow Boy inside.

I have no pictures other than this one, because I chose not to use the camera in the rain only to get water-blurred images.