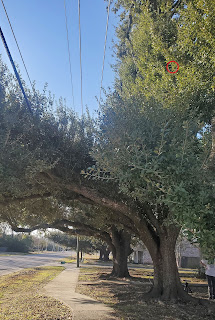 How long should I allow a cat to be stuck in a tree before rescuing it? Generally, I like to give the cat one night in the tree to see if it can figure out how to come down on its own. After all, cats learn to climb down only when they are in a position where they need to do so. Some cats can figure it out; some can't. When they figure it out, they have learned an empowering new skill which will help them climb out of another tree in the future, and they won't ever get stuck in a tree again. Also, the longer the cat has been stuck in the tree, the more likely he will be receptive and cooperative to me during a rescue.

Despite these compelling reasons to wait a night, there are exceptional situations where immediate rescue is appropriate: (1) the cat is injured, (2) the cat has a medical condition that warrants immediate rescue, (3) the environment is dangerous, e.g., there are threatening dogs on the ground that will kill the cat if it comes down or falls, the tree is close to busy roads, etc., (4) the cat owner is severely distressed, and (5) the cat is displaced, i.e., in unfamiliar territory, and would get lost if it came down or fell during the night when the owner was not there. 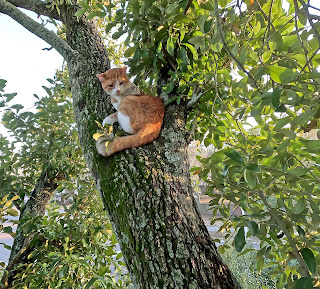 It was the latter case that led me to rescue Benjamin, a sociable, two-year-old orange and white tabby boy, even though he had been stuck in the tree only a few hours. David was taking Benjamin for a walk on a harness and leash when something happened to spook him. Benjamin deftly worked his way out of the harness and ran up the nearest tree, a Live Oak next to a busy road. David and his friend, Connor, tried to coax him down, but Benjamin planted himself in a safe place about 25 feet high on an angled branch of the tree and refused to budge. Waiting a night for Benjamin to figure out how to climb down was not advisable, because he was out of his territory, and the traffic on the road next to the tree was fast and constant. 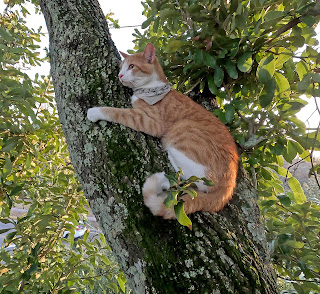 Benjamin was stuck in a strange place after being spooked by something, and he was not in the mood to be his usual friendly self. As I approached him slowly and calmly, he was not terrified of me, but he wasn't particularly happy to see me either. He sniffed my hand once, but, otherwise, showed no interest in me. I originally planned to let him walk into a carrier, but, now, I was afraid that might spook him further, especially since he occasionally would look farther up the branch as if planning an escape route. I could pet him, and he was tolerating me for the moment, but I was afraid to do anything to alarm him. I decided to grab him quickly while I had him within reach, so I prepared the cat bag on my arm, petted him gently again, and then I lifted him out of his perch and pulled the bag around him. He never resisted or complained a bit. 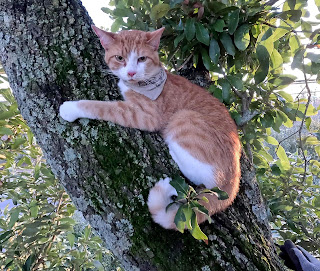 Benjamin is safe and comfortable at home now, and David has a new appreciation for the Houdini-like skill that Benjamin has in escaping a harness. Indeed, every cat has that skill, and it is something I have personally witnessed with my own cat many years ago. He casually walked out of view behind a large flower pot and emerged on the other side without his harness. It was like magic. So I worry about the popular trend now of people taking their cats on outings while showing how exceptionally cute and cool their cat is. No matter how cool your cat is, every cat is a cat, and many cats are getting lost when something unexpected and unpredictable happens. People are learning just what a tortuous nightmare it is when their cat is lost, and wise people will learn from their experiences. 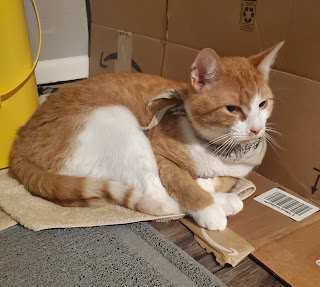