Whenever I get a call to rescue a cat in a tree, I always ask how the cat normally reacts to strangers, and my most dreaded answer is, "he runs from everyone." That was the answer I got from Carolyn about her cat Frick, and I will confess that I was not looking forward to spending my afternoon chasing Frick all over a tree in the woods in St. Francisville, Louisiana. Still, sometimes, cats surprise me, and good luck happens, but I know that good luck won't happen if I don't set the stage for it by approaching the cat with the expectation that he will be friendly. So that is what I did with Frick.

Frick and his twin litter-mate, Frack, both orange tabby boys, were born on Carolyn's bed ten months ago, and they have been with her ever since. Now, Frick is stuck near the top of a small tree just inside the woods next to his house, and he had been stuck there for one night by the time I arrived.

As I climbed up to Frick, he was not showing signs of distress at the sight of this strange man approaching him. In fact, he seemed quite pleased. He had some moments of caution, but he readily sniffed my hand and let me approach closer. Once I was close enough, he let me pet him, and he appeared quite comfortable with it. When I scratched his back, he stretched his legs and raised his butt high to push his back harder into my hand. We were buddies now. 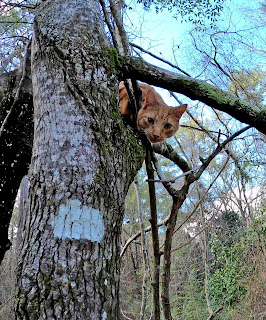 I was not in a good place or position to make a lap for him, so I offered the carrier to him instead. He had no interest in going in the carrier even with the added enticement of food, so I put the carrier away and prepared the cat bag on my arm. I petted him again, massaged his scruff, and then pulled him up gently while pulling the bag around him. He took it all in stride.

Frick and Frack are both happy to be back together at home again, and Frick is catching up on his sleep. 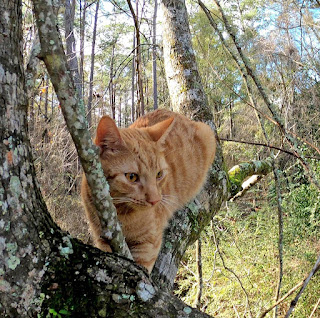 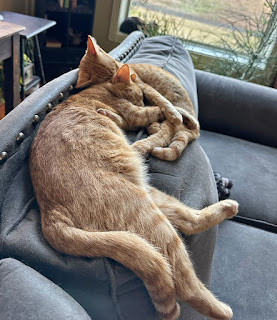